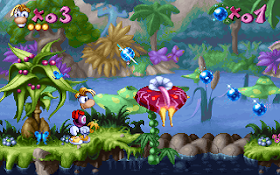 Genre: Action
Perspective: Side view
Visual: 2D scrolling
Gameplay: Platform
Published by: Ubi Soft Entertainment Software
Developed by: Ubi Soft Paris Studios
Released: 1995
Platforms: DOS, Atari Jaguar, PlayStation (PSX, PS1), Game Boy Advance (GBA), Game Boy Color (GBC)
The game, which we are going to cover in this article, thanks to the exquisite beauty of graphic design and great sound, of course, will take one of the first places in the infinitely long line razvlekalok equally interesting for both children and their loving parents to sit in front of computers. Having conquered the Jaguar console and Sony PlayStation, the game finally reached and the PC, of course, not without the help of artists and programmers of the company «Ubi Soft». A is truly masterly made masterpiece «Rayman».
The story of the adventures of the protagonist started so ...
For one magical land where nature and the living beings have lived in love and harmony, where the great stone Proton maintained harmony reigned and the fairy godmother Betila, disaster struck. Attacked her by the king of darkness, the master of the night Mr. Shadow. This type of creepy, breaking the resistance Betily, Proton and stole his little friends Electrons gravitated around him. The kids were imprisoned in an iron cage and scattered across the land in the rugged and inaccessible areas under the supervision of the evil guards - the servants of the king of darkness. Lived in this magical land, and our main character - Rayman, wonderful magical character, similar to the Moomin troll, brave and a little shy, genial and ruthless enemies. It was he who first had the idea to save his little land that not long ago were flying bird of paradise, grew beautiful flowers, shimmering in the sun magic stones and gurgled cool rivers.

START - start the game.
OPTIONS - the basic settings, where:
- MUSIC ON / OFF - turn on / off background music;
- SOUND - adjust the volume of sound effects;
- SETUP KEYS - redistribution of keys;
- SETUP PAD - joystick calibration and redistribution of the control buttons on it;
- GRAPHICS DETAILS - setting graphics options for the game;
-EXIT - exit to the main menu.
CREDITS - Information about the authors.
EXIT - exit from the game.
Selecting START, you will be taken to the screen CHOOSE A GAME, which will see three lines to identify a player and three options at the bottom of the screen:
COPY - to change the name of the player;
ERASE - to destroy;
START - start the game.
By entering into the program memory your name, then you are using the signature, hit the map with Reymana traversed by earlier levels. On the very same card, there are places to save the current state of the game - it's medallions with large cylinders middle. For each level there is a medallion entry. And if, say, you were playing at the Blue Mountains, back to the Forest of Dreams, and it released another single cell of Electrons - do not forget, coming on a map, go to the medallion with the cylinder to the level of the Forest of Dreams and sign it by pressing ENTER.
Now, as regards the control.
Function keys keyboard distributed as follows:
LEFT - move left;
RIGHT - move right;
UP - look up;
DOWN - to sit down;
ALT - jump up;
ALT LEFT - jump to the left;
ALT RIGHT - jump to the right;
ALT DOWN - crawl;
SPACE - fire;
CTRL - the use of various acquired skills. Joystick:
A - shooting;
B - jump;
On - the use of various acquired skills.
The demon of doubt, you will not regret the fact that many evenings, and maybe spend the nights at the computer. Delightful «Rayman» enchant you great graphics, decent violent and prolonged applause, and indescribably fabulous music, at the same time filled with magic, joy and anxiety ...
‹
›
Home
View web version