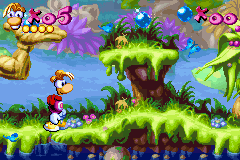 Genre: Action
Perspective: Side view
Visual: 2D scrolling
Gameplay: Platform
Published by: Ubi Soft Entertainment Software
Developed by: Ubi Soft Montpellier SAS
Released: 2001
Platforms: Game Boy Advance (GBA), PlayStation (PSX, PS1), Atari Jaguar, DOS, Game Boy Color (GBC)
Rayman highlights the elements of a video game platforms with 2D graphics engine and horizontal scrolling, incorporating a humorous and cartoonesque animation3. The player plays the protagonist Rayman in his quest to deliver the Electoons and to take over the Grand Protoon3. To do this, the player must cross six different worlds, or levels - including the Song Forest, Chromatic Sky, Blue Mountains, City of Images, Skops Cellars, and Chateau des Délices - Encounter of different allied or antagonistic characters.
The cosmic balance of Rayman's world is maintained by an artifact, more precisely a sphere, known as the Great Protoon. One day, however, the antagonist Dark decides to steal it after he managed to defeat Betilla the Fairy who was trying to protect the artifact. The Électoons - small pink and yellow creatures around the Grand Protoon - are scattered around the world. In this now unhealthy world, hostile creatures appear from the shadows to cage the Electoons. The magician, a great wizard, calls on the protagonist Rayman to free the Electoons, defeat Mister Dark and regain control of the Grand Protoon.
After the introduction, Rayman began his journey in La Foret des Songes. Here he meets Betilla the Fairy, giving him the power to strike his opponents with fists. The first antagonist encountered in the world is Bzzit, a mosquito of gigantic proportions. After defeating Bzzit, Rayman praises him; As a result, Bzzit helps him cross the level by flying over the lagoon on his back. Betilla later attributes to Rayman the ability to cling to various platforms. Behind a flower mass, Rayman meets Tarayzan, who gives him a magical seed that allows Rayman to escape a sudden rise in floods in the Marshes of Forgetfulness. Rayman succeeds in defeating Moskito, the boss at the end of the level, and Betilla gives him the power to cling to floating rings. Rayman then arrives at the second level, Le Ciel Chromatique, a region mainly composed of instruments and notes of music. He meets the end-level boss Mr. Sax, a giant saxophone. Betilla the Fairy later attributes to him the power of the helicopter, the ability to fly a small distance by spinning his hair. Rayman eventually reached the den of Mr. Sax and managed to defeat him.
In Les Montagnes Bleues, a level mostly made up of mountains, Rayman meets the Musician, whose guitar was crushed by the fall of a rock. To console him, Rayman punches a new guitar from a rock in front of him. To thank him, the Musician offers Rayman a violet flask that, by ingesting it, will attribute to him the power of the super helicopter, the same ability to fly but long distance. Arrived at destination, Rayman meets Mr. Stone, a man of giant stone. Once Mr. Stone is defeated, Betilla attributes to Rayman the ability to run at high speed. At the fourth level, Rayman arrives at La Cité des Images, a platform entirely composed of artistic materials. After reaching La Crique aux Crayons, Rayman meets twice with Space Mama, an actress disguised as Viking then as a spationaut, whom he manages to defeat. Rayman later learns that Mr. Dark kidnapped Betilla the Fairy. On the fifth level, Rayman arrives at Skops Caves, where he meets Joe the alien, owner of a creperie-buvette called Eat at Joe's, then later Skops, a giant scorpion of bright red and fuchsia. After the defeat of Skops, Rayman hears Betilla the Fairy screaming for help.
In order to reach the final level, Le Chateau des Délices, Rayman has to smash the 102 cages in which the Électoons were kept prisoners through the previous five levels. In this level of sweets, after escaping his dual evil, Bad Rayman, Rayman faces Mr. Dark that he will find it difficult to defeat. An epilogue then appears showing the speedy recovery of the Great Protoon, the liberation of Betilla, as well as Rayman sharing a good time with his allies and his former enemies.
‹
›
Home
View web version