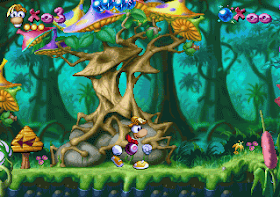 Genre: Action
Perspective: Side view
Visual: 2D scrolling
Gameplay: Platform
Published by: Ubi Soft Entertainment
Developed by: Ubi Soft Montpellier SAS
Released: 1995
Platforms: Atari Jaguar, PlayStation (PSX, PS1), Game Boy Advance (GBA), DOS, Game Boy Color (GBC)
Many probably did not know that the funny popular 2D platformer Rayman was originally planned as an exclusive for the Atari Jaguar. But Ubisoft apparently felt the popularity of the game decided to make it the same for MS-DOS. And later the game was released for the PlayStation and Sega Saturn. The port was also planned for the Sega 32X, but the console stopped supporting before the game was over. You play for the cult character Rayman, whose main task is to release his friends electunun (electoons) locked in cages. And defeat Mr. Dark. In the course of the game, Rayman will have new skills, and the game will become more complicated. In the game version for Atari Jaguar there are many exclusive features that are not available in other versions.
The game is very beautiful fairytale graphics and smooth animation.
‹
›
Home
View web version