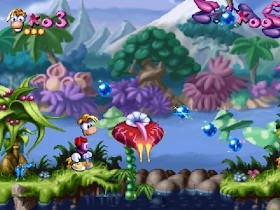 Genre: Action
Perspective: Side view
Visual: 2D scrolling
Gameplay: Platform
Published by: Ubi Soft Entertainment Software
Developed by: Ubi Soft Montpellier SAS
Released: 1995
Platforms: PlayStation (PSX, PS1), Atari Jaguar, Game Boy Advance (GBA), DOS, Game Boy Color (GBC)
The developers had planned a version for the Sega 32X, but the port was canceled when the system died out due to its low popularity. Rayman is a traditional scrolling platformer, the story of which revolves around the search for the main villain Mr. Dark.

"Rayman" is a classic 2D platformer. The objectives of the game - the release of all electoons and the victory over the favorites of Mr. Dark in all six worlds. Only with the release of each electun, Rayman will be able to enter the shelter of Mr. Dark. Otherwise, the player must again try to collect them in levels and get to the pointer with an exclamation point.
Scattered across all levels, the little blue spheres are Tings. If Reyman collects a hundred of such balls, he gains an extra life, but they can also be used to pay the Wizard to play the bonus level. Each time Rayman dies, he loses all collected Tingi.
In addition to Tingov, Reiman will encounter many other bonuses, including golden and fast fists for strikes, recovery balls and flying blue elves, reducing the size of the protagonist.
"Children's" cartoon graphics of the game contrasts sharply with its high complexity.

Rayman gets various opportunities during the game. Some of them were given to him originally by the Betilla the Fairy, while others were temporarily given to pass certain levels.
Permanent abilities (in order of acquisition): telescopic impact, seizure of ledges, seizure of levers and rings, a propeller of hair and a sprint. The hair propeller is the main feature of the entire main Rayman series, which helps a lot with such active platformers.
‹
›
Home
View web version