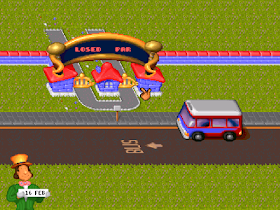 Genre: Strategy / Tactics
Perspective: Bird's-eye view
Visual: Free-roaming camera
Gameplay: City Building / Construction Simulation, Managerial / Business Simulation
Interface: Point and Select
Pacing: Real-Time
Published by: Electronic Arts
Developed by: Bullfrog Productions
Released: 1995
Platforms: PlayStation (PSX, PS1), 3DO Interactive Multiplayer, SEGA Genesis / Mega Drive, DOS
Another representative of a large army of strategy games for a personal computer made a successful transition to a home console. As one of the unusual options for an economic game, Theme Park offers players to immerse themselves in the construction and operation of their own amusement park. To great joy, the game took into account every aspect of this business. All the realities of life, including even accounting, were not left unattended by developers. The game begins with the fact that you are provided with a lease of land for the creation of an amusement park, on which you begin your activity with the construction of the most inexpensive attractions, tracks and shops. The ultimate goal of the game is to build the most profitable park in the world. This can be achieved, for example, by selling your offspring, and then establishing your new park on a more profitable piece of land, starting from scratch again, but with more financial return. The game continues until the land is built up with the park that brings the most revenue - the most expensive land. According to many, to achieve this is almost impossible, so, perhaps, it is you who can refute this assertion.
The work of the park is influenced by a huge number of small things that develop into a constant headache. You will need to choose the right workers, trojas and servicing the park, successfully arrange attractions and shops. Also, players are given the opportunity to develop a transport system that will help deliver crowds of visitors to the park. It should also not be forgotten that entertainment centers are visited by people of different behaviors, including both decent citizens and local hooligans. The latter will constantly litter and break everything in their path. It’s up to you to decide who to hire more: policemen or cleaners. If you, God forbid, overload the staff with work, then wait for the inevitable strike. Do not forget that the rides break, and in stores the goods run out.
One of the main factors attracting visitors is the appearance and equipment of the farm. For this, the possibility of building fountains, observation towers, planting trees and even building public toilets is provided. In general, nothing was forgotten when creating Theme Park.

Triangle - Park view from the first person;
Circle - Park Budget Statistics;
X - Selection Button;
Square - Cancellation / liquidation of the selected object or its part. Confirmation required.
L1 - Menu for the construction of an attraction, road, diner, etc.
R1 - Object menu. Place the cursor, for example, on a vehicle and press R1. A list of commands that can be given to the technique will appear: “forceps” - moving in the park; "wrench" - repair facilities, out of order (from such buildings knocks black smoke).
Start - "Pause" in the game.
Select - Finish the game.

All Rides, Shops And Attractions:
Enter "BOVINE" as a nickname.
Clean park:
Save the game when the park becomes full. The fresh start.
Huge amount of money:
Enter BOVINE as your name and exit. After that, set the other options as usual and start the game. On the Park Screen screen, press and hold Square + X + Circle. If you want to get rich, you can do it many times.
Super park:
Enter "BUD" as a nickname. Then press the square. After the game begins, it will be charged for the concessions, games, and park entrance.
‹
›
Home
View web version