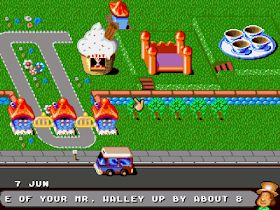 Genre: Strategy / Tactics
Perspective: Bird's-eye view
Visual: Free-roaming camera
Pacing: Real-Time
Gameplay: City Building / Construction Simulation, Managerial / Business Simulation
Interface: Point and Select
Published by: Electronic Arts
Developed by: Bullfrog Productions
Released: 1995
Platforms: SEGA Genesis / Mega Drive, 3DO Interactive Multiplayer, PlayStation (PSX, PS1), DOS
The majority of gamers who have ever had the chance to play Theme Park for Sega 16 bit, call this game the best in the genre of Sim-shaped strategies.
The game was released for the Sega Genesis platform in late 1995 - early 1996. Here you will find a very interesting lesson - building your own brand new theme park.
Estimating the schedule of the game, it is worth noting that its level is very low - on the "grade". The figures of people are very flat and angular. Nevertheless, graphics in games of this type only play a secondary role. Much more important here is the business strategy that you are building with your own hands. It is necessary not only to build, but also to make your child commercially successful in order to avoid bankruptcy. Everything is completely in your hands. You control everything from the location of your workers on the map to the amount of salt in the prepared dishes. A huge advantage of strategic games, and in particular Theme Park before the games of other genres, is that interest in such strategies fades much slower than, say, the brodyls. The reason lies in the variety of choices from an unlimited number of solutions for the construction of a theme park. In general, you are guaranteed several hours
Uninterrupted tactical actions, after completion of which (successful or not), there will necessarily appear a desire to again try their luck in this business.