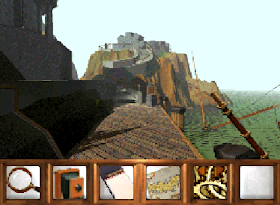 Genre: Adventure
Perspective: 1st-person
Gameplay: Puzzle elements
Published by: Midway Games Limited
Developed by: Cyan
Released: 2007
Platforms: Nintendo DS (NDS), 3DO Interactive Multiplayer, PlayStation (PSX, PS1), Windows 3.1
Adventure, which, one might say, spawned a whole subgenre, gave rise to talk further about Myst-like and Myst-like games. After reading the old handwritten book in the library, you find yourself in its world deserted, beautiful, diverse, full of mysteries and mechanisms. Fancy mechanisms are controlled by everything in Myst. They are not corrupted, they only need to debug and configure. Having configured the device, you will get access to one of the four worlds, and in each you are waiting for new cars. The mechanic in Greek means "cunning", so that ingenious mechanisms and mechanical tricks are a tautology, but it is so suitable for this game, in which the mechanics is squared!
When creating the DS version of the game, source materials were used, thanks to which the graphics and sound were updated, and Rime Age, excluded from the PC version of the 1993 game, was also added.
‹
›
Home
View web version