Genre: Adventure
Perspective: 1st-person
Gameplay: Puzzle elements
Setting: Fantasy
Published by: Brøderbund Software
Developed by: Cyan
Released: 1993
Platforms: Windows 3.x (Win3.x), 3DO Interactive Multiplayer, PlayStation (PSX, PS1), Nintendo DS (NDS)
Access for all worlds in Savegame folder.
Myst - a computer game in the genre of graphic quest by the brothers Robyn Miller, Rand Miller. Brother Miller began work on the game in 1991, and it was released on the Macintosh September 24, 1993. The game has become a model for the creation of adventure games, giving rise subsequently a number of similar projects. In addition, the success of the game has allowed to create a Myst-igroseriala, including four continue. The game's plot was the basis for several works of art.

Myst with extensions sold around the world in the amount of about 12 million copies and has long been considered the best selling game. This achievement was subsequently able to beat only one game - The Sims. Ingredients for success Myst series are: 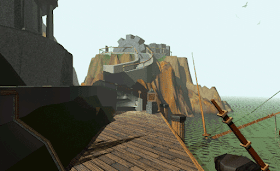 four sequels: Riven, Myst 3: Exile, Myst 4: Revelation and Myst 5: End of Ages;
two remakes: Myst Masterpiece Edition and realMYST;
Uru: Ages Beyond Myst and two add to it, Uru: To D'ni and Uru: The Path of the Shell, board games are hybrids, to collect the best finds of the original Myst series and created on the basis of its game world. Later, a series of Uru was released under the title Myst Uru: Complete Chronicles;
Uru Live - MMORPG-version of Uru. Shortly after the appearance of the internet beta project was shelved, but later resumed under the name Untìl Uru. The final release was called Myst Online: Uru Live, the game appeared February 15, 2007 and became available by subscription in the U.S. and Canada;

Who undertook the creation of the game creative team consisted of four people: it consisted of Brother Miller, artist Chuck Carter and sound engineer Chris Brandkamp. Support provided to developers Japanese company Sunsoft. Team roles are as follows: Robin Miller was designing the island of Myst and the worlds Stoneship and Channelwood, and at this time Chuck Carter created the worlds projects Selenitic, Mechanical Age civilization and the D'ni
The game was created by a series of Macintosh computers manufactured by Apple (they were mostly Macintosh Quadras, but the music was written on the Macintosh SE). Modeling and rendering each scene taking place in the program StrataVision 3D, often additionally used the program Macromedia MacroModel. Editing individual images is done using Photoshop 1.0. One of the employees of ILM, John Knoll (John Knoll), has developed a special plug-in for Photoshop, which allows you to work with the animation of individual images. With this program, non-linear editing Premiere create visual effects.
The original Macintosh to work on a HyperCard (file viewer with hypertext capabilities). Every world created by the developers used this technology for themselves in a unique way. When creating games have been used HyperTalk, QuickTime, Simplex HyperTint, carried out with the video compression codec Cinepak. The images have been uploaded to the game as an 8-bit PICT-resources with a predetermined color palette. As a result, despite the low bit depth color scheme has been set high bar for graphics era of 8-bit games, which now had to be equal to all developers.
On disc includes a "bonus video" developers, which describes the creation of the world Myst.

There are at least two versions of the presentation of the storyline. The first of these is presented in the form of manuscripts D'ni from the instruction manual for the game, the second player also observed directly in the game, and allows for a certain degree of ambiguity and different interpretations of events. Immediately it should be noted that the events of the game take place in the early 1800s.
Under mysterious circumstances, the protagonist of the game, labeled Stranger, is an unusual book called «Myst». According to the user manual, it reads the book and discovers a detailed description presented in her island. When the hero comes to the last page and put my hand on her mysterious force suddenly moves it to a world of which he had just read. However, the game itself is all a bit different: the hero opens the book and sees that on the first page is a graphical representation of the mysterious island; Wanderer for the image and moves in this world, nothing about it and not knowing.
Located on the island of Myst library, which found two books: the red and blue. These books are traps, prisons, which concluded Sirrus and Achenar. Both are sons of a Atrus. As it turns out, Atrus - is the owner of a mysterious island of Myst, which has an ancient ability to write the book-worlds and make them a reality. This ability is called Art. It Atrus, according to the brothers, locked them in the books, and they beg Wanderer give them freedom. Immediately catches the eye is that the red and blue books skipped a few pages, which is why we are brothers unintelligible sounds and not fully understood. It was missing pages and will seek the Wanderer in this mysterious place.
Explore the island and solving challenging puzzles, Wanderer finds four books portal leading to other worlds. Visiting each of them, the hero finds the red and blue pages, then comes back to the island of Myst. Pages are added to the relevant books, and we are brothers becomes more clear and understandable. After four pages will be returned in one of the books (red or blue), one of the brothers, locked in her report Wanderer that the full release is also required, and the fifth page. What choice do in this situation: the release of one of the brothers or not to release anyone? The more that is found near a third - green - a book in which he concluded Atrus ...

Moving between the worlds represented in the game is through books portals, written by Atrus and hidden in remote places. To gain access to one of the books will have to tackle tough, but at the same time interesting puzzles. Each book takes the Wanderer in the world that it describes. The very art of making such books introduced the ancient civilization of D'ni, which, according to legend, lived in the deepest cave on Earth.

The game features the following worlds:

The gameplay is a moving player on the interactive world with a first-person. The motion is carried out by means of mouse clicks on the active areas of the screen, resulting in a transfer to other locations. Using the mouse, a player may also interact with some of the surrounding objects (e.g., moving them). Unlike most computer games, it is impossible to die at the hands of enemies or unforced circumstances, the only problem for the player is a challenging puzzle.
To complete the journey the player must visit all the worlds in the game, moving them through books. The player must collect the pages for the two books, but unlike many games of this genre, except pages a player must not collect a lot of obstacles and put them in your inventory. At the end of the adventure character returns to its starting position and, using the obtained information in the course of an adventure, makes his choice.
According to the developers, secluded and mysterious atmosphere of the island of Myst its appearance must first novel "The Mysterious Island" of the French science fiction writer Jules Verne. Some influence on the game's creators had also novel Argentine writer Adolfo Bioy Casares' Invention of Morel".

Myst: Masterpiece Edition - an updated version of the original game, which appeared Sept. 1, 1999. Because of the surviving bugs and partly Acronym soundtrack reissue was made very cool game fans. List of major changes and additions to reprint the following:
8-bit images are replaced with 24-bit (TrueColor);
add additional points of view;
change the sound effects and music;
Added an in-game map and clues.

In this commemorative edition dedicated to the tenth anniversary of the original game have been included bug fixes and restored the original soundtrack. As an added bonus version of Riven and Myst 3: Exile.

In November 2005, the company Midway has announced a remake of the popular game console PlayStation Portable. This re-release was to include bug fixes and the original game, and the alternate world The Rime Age, which fans could watch back in realMYST. June 15, 2006 the game was released in Japan, 21 December 2006 - in Australia, and later in Europe and North America.

Release of the game on this console in November 2007. The port has received negative feedback from fans and the press - the main criticism came in an uncomfortable realization of control, compressed to fit on the cartridge game graphics and sound, and poor performance of the game. The total score on the version Metacritic - 43/100, made up of 11 neutral and 14 negative reviews.

Parodies of the game