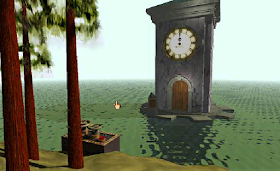 Genre: Adventure
Perspective: 1st-person
Gameplay: Puzzle-solving
Setting: Fantasy
Published by: Psygnosis Limited
Developed by: Cyan
Released: 1995
Platforms: PlayStation (PSX, PS1), 3DO Interactive Multiplayer, Nintendo DS (NDS), Windows 3.1
Under obscure circumstances, the protagonist of the game, designated as the Stranger, finds an unusual book called "Myst". According to the user's manual, he reads the book and finds a detailed description of the island represented in it. When the hero reaches the last page and places his hand on it, an unknown force suddenly moves him to the world he has just read about. However, in the game itself everything happens a little differently: the hero opens the book and sees that the first page is a graphic representation of the mysterious island; The traveler touches the image and moves to this world, nothing about him and without knowing.
On the island of Myst there is a library, in which two books are found: red and blue. These books are traps, prisons, in which are enclosed Sirrus and Achenar. Both of them are represented by the sons of a certain Atrus (Atrus). As it turns out, Atrus is a mysterious creator and owner of the island Myst, who has an ancient ability to write world books and embody them in reality. This ability is called Art. It was Atrus, according to the brothers, who locked them in books; they beg the Wanderer to give them freedom. It immediately catches the eye that there are several pages missing in the red and blue books, because of what the brothers' speech sounds inaudible and is not fully understood. It is the missed pages that the Wanderer will have to search for in this mysterious place.
Studying the island and solving complex puzzles, the Wanderer finds four books-portals leading to other worlds. Visiting each of them, the hero searches for the red and blue pages, then returns to the island of Myst. Pages are added to the corresponding books, and the speech of the brothers becomes more and more clear and understandable. After the discovery of all four pages for each of the books, the brothers inform the Wanderer that for their complete liberation, the only fifth page is also necessary. What choice do you make in this situation: to release one of the brothers or not to release anyone? Especially since the third is also found - the green one - the book into which Atrus himself is imprisoned ...
‹
›
Home
View web version