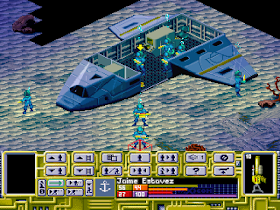 Genre: Strategy / Tactics
Perspective: Bird's-eye view
Pacing: Turn-based
Interface: Multiple Units / Characters Control
Visual: Isometric
Setting: Sci-Fi / Futuristic
Narrative: War
Published by: MicroProse Ltd.
Developed by: MicroProse Ltd.
Released: 1996
Platforms: PlayStation (PSX, PS1), DOS
X-COM: Terror From The Deep - the second game in the series of computer games X-COM, which is the continuation of X-COM: UFO Defense. The following article is the material of the Free Wikipedia Encyclopedia and is more concerned with the PC version of the game.
At the time of its destruction, the Martian civilization sent into space a powerful signal that reached a huge space ship that fell to Earth (into the Gulf of Mexico) millions of years ago. In 2040, a new threat, this time coming from the depths of the sea, forces the governments of the world's leading countries to revive the organization of X-COM.

Differences from the first part

The concept and mechanics of the game have not undergone any noticeable changes. X-COM: Terror From The Deep differs from its predecessor in the main details:

The authors of X-COM: Terror From The Deep made the tree of research wider and more confusing compared to UFO Defense. In order to obtain some technologies, it is necessary to investigate two or three others. However, the rush in the creation of the game led to the fact that there are several errors in the research tree, which in certain situations make the successful completion of the game impossible. The basic principle is that by the time the technology is completed, the player must have an artifact of the following technology in stock, otherwise it will be impossible to investigate it (for example, it is necessary to have M.C. Reader at the conclusion of the M.C Lab study).
In the earlier versions of the game, after the command of the commander, the player was inaccessible to the Leviathan submarine, which was necessary to complete the game. In later versions, the commander of the troops in case of captivity should no longer appear on the research list.

Compared to UFO Defense, the number of aliens has decreased from five to four, but the number of terrorist units has increased from six to seven. Also there were mixed crews, when on a mission (like when assaulting aliens who were downed or sat down at the bottom, and in the missions of terror and in defending their bases), one can meet representatives of different races.

Aquatoid - the classic "green man", an underwater analog of the sectoids from the first part of the game. In later missions, leaders have a limited ability of molecular control. Weak / medium (if there is an MC-capable leader) the enemy.
Gill Man is a green-skinned representative of prehistoric earthly race, who agreed to cooperate with aliens in exchange for their survival. Weak opponent.
Lobster Man - lobster growth from a man, moving on the hindlimbs. The shell is very resistant to all kinds of small arms. A dangerous opponent.
Tasoth - a fast and viable creature, resembling a cross between a lizard, dinosaur and eel. Leaders have the ability of molecular control. Clever and dangerous opponent.

Deep One is a white humanoid with a trunk. Spits on the parabola. His spittle is almost safe for those on whom armor is worn, but for people without armor, it is fatal. Accompanies Gill Man in the ground-based terror missions. Under water there is only one time - in the final mission. Mild to dangerous opponent.
Bio-Drone - analogue of the cyberdisc in UFO Defense, but less (it takes one cell instead of four). Explodes when destroyed. Accompanies ground missions both lobsters and thachers. A dangerous opponent.
Calcinite is an amorphous creature in diving gear. Attacks only in melee combat, but very much. Accompanies aquatoid in ground missions. The average opponent.
The hallucinoid is a huge jellyfish. It poses a danger near. It occurs only on enemy bases.
Xarquid - Nautilus hypertrophied sizes, the rarest species of aliens.
Triscene - looks like Reaper from the first part, but differs from it with exceptional strength. A large prehistoric predator. Destroyed only by grenades. It also occurs very rarely, usually in the missions of terror on ships with thosotami.
Tentaculat is an analog of Krisalid from the first part, only unlike the latter, it can fly. Is the most dangerous opponent in the game. Attacking a soldier, turns him into a zombie, from which after the murder hatch another tentakulat. It occurs on enemy bases. In terrestrial missions, terror does not participate, so it is not possible to turn zombies into civilians, unlike krssalid from the first part, which could seriously complicate the player's mission with such activities.