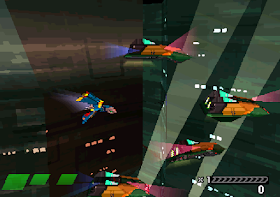 Genre: Action
Perspective: Side view
Gameplay: Shooter
Visual: 2D scrolling
Setting: Post-Apocalyptic, Sci-Fi / Futuristic
Published by: Sony Computer Entertainment America
Developed by: Square Co.
Released: 1998
Platform: PlayStation (PSX, PS1)
... The future has come, as always, unnoticed. And humanity to his arrival in every possible way was tightened up in moral, technical and other plans. The Earth finally organized itself into an integral Union and created the first colony. However, general discretion did not last long. Already at the beginning of the Utopian era, the Third World War broke out. In that war all humanity suffered, except for that part of it that sat on the moon. It is not difficult to understand that there is not enough space on the Moon for the development of the leading branch. And Selene (the inhabitants of the Moon), demanding the return of the mysterious object Sodom, invaded Earth in the hope of conducting a successful Blitzkrieg, crushing the flimsy earthly resistance. But everything turned out to be more complicated. The earth was stubbornly defending and the forces of both sides began to dwindle. Then Selene decided to resort to the last resort. Ultra-technological developments and the latest solutions in the field of armaments were merged into a new Einhänder fighter (the letter "a" with the umlaut - the word German). Starting from that moment, we take the joysticks in hand. We are destined to play on the side of the invaders Selenium. At least this follows from the initial video.
Einhänder boasts great graphics even now, because in our time games of this genre (horizontal scroller) do not. I can not help saying that Einhänder is probably the most beautiful game on the PlayStation.
Now about the game itself. The genre of the scroller implies that we will have to operate some kind of vehicle (in this case, a great fighter, painted in the Japanese transformer style), which has two degrees of freedom on the screen. And in our side will fall the enemy in the form of small, medium and very heavy tech.
At the very beginning of Einhänder-a they will let us feel the whole drive, I'm not afraid of this word. Only we materialize on the screen, as we will be attacked by patrol cars with flashing lights, limiting tanks and other lunar technology of the distant future. And everything is accompanied by comments in German (!!!). So it seems that the same restless guys are leading the occupation.
As soon as the first less significant enemy is destroyed, we find an amazing thing: all our Einhänder weapons are not received in the form of a trivial box-with-letter genre, but in the form of a trophy left on the charred body of enemy equipment, and this trophy needs to be in time pick up. But each with a dozen guns drawn separately. And depending on which type of fighter you select at the beginning, you will be able to collect up to three additional guns plus to your machine gun, combining them right in battle.
So we get the perfect action-entertainment for long evenings. High-end electronic music accompanying the game, a lot of micro moments, like detailed animations of even small reptiles (almost all enemy technology is destroyed in pieces, and even shudders from the exact hits on it), stylish render cutscenes in the spirit of Squaresoft (everyone remembers Final Fantasy) - all this only makes Einhänder the brightest representative of the genre. So that…
I, as a person who watched the development of the gaming industry from Amiga and Spectrum, along with NES, Sega, SNES, PSX and up to the current super-graphic PC games, I say this Einhänder will not do now. So we're playing.