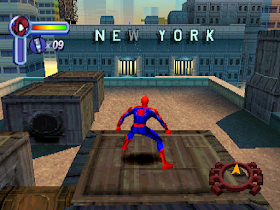 Genre: Action
Perspective: Behind view
Published by: Activision Publishing
Developed by: Neversoft Entertainment
Released: 2000
Platforms: PlayStation (PSX, PS1), Nintendo 64 (N64), Game Boy Color (GBC)
Neversoft Entertainment, a company that already has Tony Hawk's Pro Skater, decided that it's time to try to create another game. Using the engine of the mentioned game, they created a 3D image of New York, along which they can circulate, hide and walk through an arthropod, while simultaneously wiping the bad guys off the face of the earth, restoring the truth and justice inherent in real Americans. And all in this spirit. Our hero discovers that he is at the very center of a dirty conspiracy, according to which he is accused of a crime he did not commit. Someone, disguised as Spider-Man, stole one of the latest technical inventions of Dr. Otto Octavius, and the real Spider-Man discovers that he is being sought.
The game begins with the fact that our hero is trying to fool the bank robber, but as a result, he causes the wrath of the police, who are chasing him on the roofs of skyscrapers. Exploding shells, whistling bullets and police efforts - all this pushes Spider, forcing him to jump into a metaphorical electrical outlet. Trapped, Parker stumbles upon a cunning opponent - Snake, and suddenly it turns out that the diabolical mind behind the conspiracy is none other than Otto Octavius's second self, his enemy Dr. Octopus. As Spook moves forward, it is more and more attacked by pink and slimy, half-decayed from drugs symbionts, which jump off the generators in the basement of the Daily Bugle. Walking along the trail of mucus, Spider opens a huge underwater generator that Dr. Sprut created by sending an entire army of Symbiotts and instructing them to turn the respectable New Yorkers into roaring mutants who would completely obey him. However, the events unfold not exactly as he planned - as wisely observed by our mohnopod friend. The symbionts are out of control, and soon the Octopus discovers that it is covered with some strange lumps to the very ears.
During the game, you will witness the appearance of the most famous personalities from the world of Wondrous Heroes, although this will only happen occasionally. Among them will be the Human Torch of the Fantastic Four, the Sorvi-Head, the Black Cat, the Amphibian Man, the Wizard, the Lizard and Scorpio. However, it is clear that Neversoft, in cooperation with Marvel Comics, especially tried to follow all the details. Fans of comics take their super heroes very seriously, and any deviations from traditional images would be immediately noticed. But this does not mean that the game is intended only for fans of Marvel.
‹
›
Home
View web version