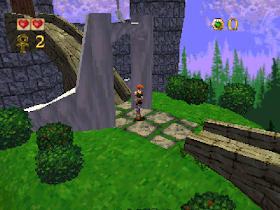 Genre: Action
Perspective: Side view
Visual: 2D scrolling
Gameplay: Platform
Published by: Sony Computer Entertainment Europe Ltd.
Developed by: Crystal Dynamics
Released: 1996
Platform: PlayStation (PSX, PS1)
With the advent of game consoles with a 3D image, the creators of platform games began to experience obvious difficulties. Despite all the attractiveness of this genre, the flat (2D) image, with which the game action inevitably involves, ceased to satisfy the fans of platform action. I had to come up with some new solutions. Began to appear on the real 3D platform games (for example, Mario 64 for the new system Nintendo 64). And here's the Pandemonium! Game on PlayStation, though it's not exactly a 3D game, as the action unfolds in two dimensions (often just right to left), but all this is represented in a 3D stereo image and in stunning scenery.
The plot of the game is as follows. In the magical city lived a cheerful buffoon with a talking stick and a beautiful acrobat. Once they found an old magical book. The jester and acrobat wanted only to amuse his friends, but inept treatment of magic led to the most unfortunate consequences: a huge monster appeared and swallowed the whole city. To save their hometown, the heroes of the game must find the crystal of desire. You have to wander and jump through the woods, celestial castles, fly on the airship and perform many desperate actions, and collect various items.
Perhaps the most basic thing in the platform game is the image of the main character; he alone can pull out the whole game (remember at least that legendary Mario). In this game, the two main characters, and at different stages, they in turn have the opportunity to show their skills.
Fargus is a short man - a jester in a funny hood and with his unchanging companion - a talking cane named Sid (his voice is voiced by the famous television comedian Greg Prups). Its main advantages are high speed and a remarkable attack by a somersault, with the help of which it gets rid of enemies.
Nikki - girlfriend Fargus, in the past acrobat, and then - a schoolgirl magician. Its special property is a double jump, with which it can get into seemingly inaccessible places. Perhaps, because of this, you even want to perform in her image more often than in the image of Fargus.
At some levels, there are quite significant difficulties. For example, a strong headwind can blow, meaning that you can only move in one direction. Or it is necessary to show special dexterity, sliding down the icy paths. Or, to get to hard-to-reach places, you have to jump on the springboards, and sometimes on a spider web or even a cloud. There are also tunnels, large boulders and other obstacles.
In some points, you have a choice: go straight to the exit or go to the side for additional earnings? The fact is that at the end of each level you get a rating for the results of collection of treasures, and reaching a certain rating opens the way for a bonus stage! So it's better to look for hidden treasures and defeat enemies - this is also rewarded. There are also secret rooms, usually representing small plug-in games, for the victory in which you are rewarded.
Of course, almost all platform games are similar to each other, and in this case Pandemonium! - not an exception. Additional sources of energy usually here take the form of magic charms - fireballs, freezes, shields and stuff. In some points of the game your character can be transformed into one of the animals, acquiring the appropriate qualities. For example, a frog can jump very high, and a dragon can fly and spew a flame.
It is clear that some players Pandemonium! can seem a game too easy and even banal. But lovers of platformers will be able to enjoy the gameplay, and from excellent graphics. Pandemonium! one of the best platform games created for the PlayStation system, amazing in design and excitement.
‹
›
Home
View web version