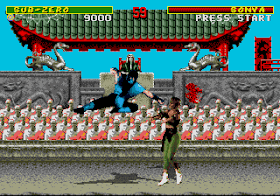 Genre: Action
Perspective: Side view
Visual: 2D scrolling
Gameplay: Fighting, Martial Arts
Published by: Arena Entertainment
Developed by: Midway Games
Released: 1993
Platforms: SEGA CD / Mega-CD, Super Nintendo (SNES), SEGA Genesis / Mega Drive, DOS, Arcade Machine
The game Mortal Kombat is the first part of the popular series of fighting games Mortal Kombat. The game has a very interesting story, in which you have to defend the rights of the earth in the external world. The game features seven characters that you can play. Once in a hundred years, on earth, the best fighters are collected to fight in a deadly battle. Each of the fighters has its own story and motives to fight.
In the Mortal Kombat version for the Sega Mega CD, there are some differences from Mortal Kombat for Sega MegaDrive/Genesis. There is an introductory video, with a wonderful melody. And as the story of each character, as in the original arcade version of the game.
‹
›
Home
View web version