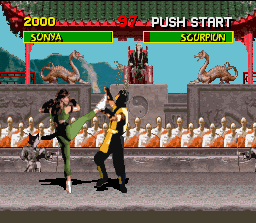 Genre: Action
Perspective: Side view
Visual: 2D scrolling
Gameplay: Fighting
Interface: Direct Control
Setting: Fantasy
Narrative: Martial arts
Published by: Acclaim Entertainment
Developed by: Midway
Released: 1993
Platforms: Super Nintendo (SNES), SEGA Genesis / Mega Drive, SEGA CD / Mega-CD, DOS, Arcade Machine
The plot of the game tells of a Tibetan monk, Liu Kang, who comes to the Death Tournament in order to defeat the evil magician ShangTsunga, who steals the souls of the lost warriors, and establish peace, ending the suffering of those who perished in the way of the villain. Also, a number of fighters from around the world come to the tournament, each of which pursues its own goal. In consequence, each fighter will become a legend, his phrases will fly away from the teeth of gamers, and punches - memorized by heart.

Gameplay in appearance is similar to a bunch of similar fighting games: we choose a fighter, we are given an opponent, and all you need to do is defeat the villain in two rounds. But the distinctive feature of Mortal Kombat is the bloody finishing at the end of the battle. A defeated opponent stands for a few seconds in anticipation of a crushing blow, and in this short time the player must enter a special combination of joey buttons, which will allow him to finish off with particular cruelty. Such a move has never been used on such a scale, and the appearance of such a bloody element in the game immediately received many negative reviews from parents and the press. As a result, the game was censored on some consoles (for example, on the SNES), but it remained cruel and bloody. Is not this what gamers want? Another interesting point, unfortunately, is not received continuation in the series - this is a competition for breaking boards between rounds. An interesting move, especially during the game together. In the rest, the graphics were not much different and much inferior to the same Killer Instinct (here, guys, my own opinion, so do not take it seriously).

Not many people know that the soldiers were "drawn" from real fighters and one of the candidates for the main characters was Jean Claude Van Damme himself. However, the latter, because of the employment in another project, could not participate in the work. And, the cinematic graphics was not the first in the MC. Suffice it to recall a game like Pit-Fighter. There, too, such a method was used, only the movement could be not only left-right, but also up and down. But you all know that the game was not very good and the players around the world did not get recognition.
It's also a very interesting fact that Mortal Kombat is the only part of the series where there is initially no normal explanation of the plot, and we learn many nuances in the following parts. The success of the game could not but lead to the creation of a series of films, and subsequently serials. The first part of the film Deadly Fight came on television in 1995 and was a huge success. In the film, all the fighters were used, the plot almost completely overlapped with the game, and the special effects caused wild delight among schoolchildren of that time. The pirate cassette was passed from hand to hand and was rubbed up literally to holes. It is worth noting that many consider the adaptation of the MC almost the best video game. And you can not help but agree: smart fights, among which such memorable fights as, for example, between Liu Kang and Sab-Zero, Johnny Cage and Scorpio. Moreover, the most interesting thing is that the creators of the film did not bypass the fans of the game and introduced small perks. One of them is a fight with such a cult on that unplayable character - Reptile. In addition to the above, I will say even more weighty words - the smartest soundtrack, which you can always listen anywhere.
On our favorite console game was ported in 1993 together with the port on Sego. Graphically, the game looked better than Segov's analogue, the same was with the audio component, but there were moments in which SNES was inferior. As we wrote above, the game was subjected to strict censorship, the blood was replaced by a green liquid and its amount was sharply reduced. All the same, at that time, Nintendo was afraid of discouraging MK. In the version for SNES, "bloody" was simply cut out, when the version for sega was not lost and was available when entering the code on the title page.
Mortal Kombat very controversial project, still considered one of the most bloody among games, made a furor in its time. The first part, although not strong graphically, nevertheless formed the basis of the series and became the predecessor of a whole series of games, which we'll talk about later. And, not just a series of games - a whole generation of games that took the MC as an ideal for their ideas. The game that opened the eyes of the world to cruelty, and gave people to enjoy it ...
‹
›
Home
View web version