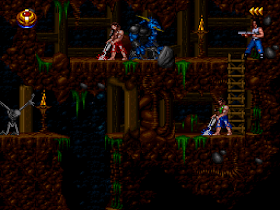 Genre: Action
Perspective: Side view
Visual: 2D scrolling
Gameplay: Platform, Shooter
Setting: Fantasy
Published by: Interplay Productions
Developed by: Blizzard Entertainment Inc.
Released: 1994
Platforms: Super Nintendo (SNES), SEGA 32X, DOS
Looking at the graphic design of the game, you can say that Interplay (Producer) and Blizzard (Distributor) have tried in their time to do this in other games, such as Out of this World (it's Another World - Another World) and Flashback (like the movie - Remember all). But they are fickle, and there are no places that differ in graphic design. But still Blackthorn has its graphic differences. Kyle Blackthorn (the main character - well, to whom I explain this) is beautifully decorated, as well as some of his enemies. Explosions and various bombs deserve the highest scores on the scale of graphics. Music in Blackthorne is beautiful. Unlike Flashback and Out of this World, here music always sounds. Music carries the mood of the game - gloomy, but full of action. The sounds in Blackthorne are the best (in the opinion of the originator), which could be heard in a combat brothel. Explosions - deafening! There are individual sounds of trolls here - when they die, or they laugh at you when you do not have time to dodge the impact. Sound is always synchronized with graphics, i.e. You can see and hear a bullet (from himself noted). In each level, you play for Kyle, who needs to find keys, bombs and allies, to access the next level. As already mentioned - this is a 2D game, but it's not a moving screen, but you're transferring Kyle from the screen to the screen, which adds interest to the game. Evil hides slave owners in the shadows. Stone monsters are hiding among similar stones. You must shy away from their bullets in order to reach alive before meeting Sarlac. The game has many more fights, compared to the above mentioned Flashback or Out of this World, but the game becomes more difficult because of the many mysteries to think about.