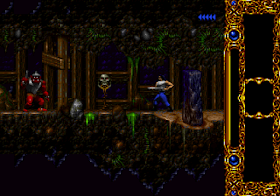 Genre: Action
Perspective: Side view
Visual: 2D scrolling
Gameplay: Platform, Shooter
Setting: Fantasy
Published by: Interplay Productions
Developed by: Blizzard Entertainment Inc.
Released: 1995
Platforms: SEGA 32X, Super Nintendo (SNES), DOS
An excellent game, combining several genres from Blizzard Entertainment. The game of Blackthorne is somewhat like the game Prince of Persia. In the game you also have to solve various puzzles, jump, traverse traps and move from the screen to the screen. The game takes place in a fictional world, where firearms and magic are fully combined. The plot of the game begins many years before the main action in the game. Thoros is the last ruler of the planet Tuul. It was very difficult for him to share power between his two sons. Assuming that he came up with a solution to the problem, he leads his sons into the desert. And he kills himself. His body turns into two stones of light and darkness.Tuul came to the world, until the evil ruler Sarlac using the dark stone took power. King Vlaros orders that his son Kyle Vlaros (Kyle Blackthorne / Kyle) be sent to the ground. To save his life. Together with a Lightstone.Twenty years after these events, Kyle became a brave soldier decides to return to Tuul to save his people.
The game is fascinating and interesting, it can attract fans of violence and blood in games. In the arsenal of our character there is a gun (shotgun) and grenades, they can blow up doors or destroy enemies. Quite unique in the game was that you can dodge bullets. This can also be done by enemies.
In Europe, the game is called BlackHawk.