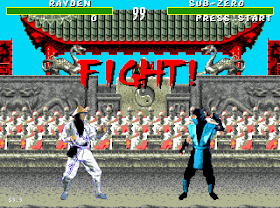 Genre: Action
Perspective: Side view
Visual: 2D scrolling
Gameplay: Fighting, Martial Arts
Published by: Acclaim Entertainment
Developed by: Midway Games
Released: 1993
Platforms: SEGA Genesis / Mega Drive, Super Nintendo (SNES), SEGA CD / Mega-CD, DOS, Arcade Machine
This is the same Mortal Kombat, which simply blew up the public in due time. This is his first part, albeit not with the best graphics and with a not very large set of fighters, but he was the first. Here you are given the opportunity to go through the tournament for seven fighters at the end of which Shang Tsung is waiting for you.

In order to activate the bloody regime (in the duel blows will be accompanied by blood sprays), when the game starts, wait for the gray screen on which the letters are printed, and type: A + B + A + C + A + B + B. If everything is done correctly, the phrase "Get over here" will sound, and the letters will turn red.
To access the secret setup menu, wait for the Start \ Options screen to appear. Type: down + up + left + left + A + right + down. After that, one additional option should appear - "Cheat Enabled". This menu has Characteristics that require decoding: Chop-Chop - you need to choose one of the items that you have to test for strength in the power test; 1Play \ 2Play Chop - select the frequency of the power tests: x0 - no checks, x1 - after each fight, x2 - after every two fights, etc .; Flag 0 - sudden death for the 2nd player; Flag 1 - sudden death for one player; Flag 2 - visible shadows of fighters on the Pit-arena; Flag 3 - by choosing Pit as a battle arena, you will see the faces of the fighters against the background of the Moon. This trick will work if the value of the tests of sounds, music or effects in the options is not equal to 1; Flag 4 - tips from Reptile at the beginning of each fight; Flag 5 - infinite continuations; Flag 6 - the computer always performs "fatalities"; Flag 7 - always fight on "The Courtyard" before the appearance of Goro.
In order to fight with the secret character of "MK", Reptile, select any fighter, except Sonya. Activate "cheat mode" and select "The Pit" as the scene for the fight. Set Flag 1 and Flag 2 to "On". Start the fight and, without using the block, win both rounds, without having received a single blow (Double Flawless Victory), do Fatality. During the battle with Reptile, press start on the second joystick, and in the selection menu of the fighter Sub-Zero and Scorpion will turn green. If you defeat Reptilia, the next secret fighter will appear.
‹
›
Home
View web version