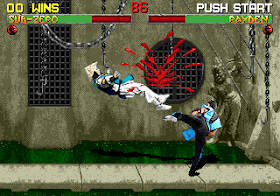 Genre: Action
Perspective: Side view
Gameplay: Fighting, Martial Arts
Published by: Acclaim Entertainment
Developed by: Midway Games
Released: 1995
Platforms: SEGA 32X, PlayStation (PSX, PS1), Super Nintendo (SNES), SEGA Genesis / Mega Drive, DOS, Arcade Machine, SEGA Game Gear
And this is another example of an improved version of the game. In addition to remarkable graphics and sound, you get even more fighters, new levels and much more!
Who else does not know what this game I'm talking about is the best game of the fights genre, made on the cult film Deadly Fight!
And more about the schedule: it's just on top! All the characters are carefully drawn and move very smoothly, the levels are also detailed. Not without exaggeration I will say that this is one of the best releases in the history of video games (only versions for PSX and N64 have reached the same heights).
‹
›
Home
View web version