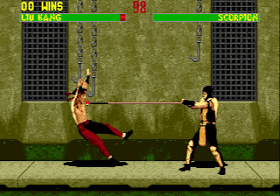 Genre: Action
Perspective: Side view
Gameplay: Fighting, Martial Arts
Published by: Acclaim Entertainment
Developed by: Midway
Released: 1994
Platforms: SEGA Genesis / Mega Drive, PlayStation (PSX, PS1), SEGA 32X, Super Nintendo (SNES), DOS, Arcade Machine, SEGA Game Gear
Compared with the first part, the graphics have been improved enormously; The number of fighters, apart from the secret ones, has been doubled. There is also an act of finishing such as Fatalitic bloody finishing usually with dismemberment of the corpse of rival Babaliti - turning him into a child and Friendship - a kind of try-on with a rival.

Enter the OPTION, move the pointer to the DONE line and press LEFT, DOWN, LEFT, RIGHT, DOWN, RIGHT, LEFT, LEFT, RIGHT, RIGHT. If you did everything correctly, "TEST MODES" will appear on the screen. This is a hidden menu. Entering it, you can establish death with one blow, any stage and much more.
Now highlight these words with the cursor and enter the test mode menu. In the test mode, there are three menus with a variety of options. Below is a description of the options in various test modes.