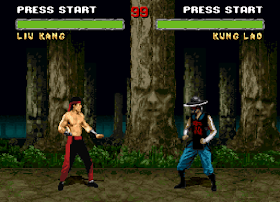 Genre: Action
Perspective: Side view
Gameplay: Fighting, Martial Arts
Published by: Acclaim Entertainment
Developed by: Midway Games
Released: 1994
Platforms: Super Nintendo (SNES), PlayStation (PSX, PS1), SEGA 32X, SEGA Genesis / Mega Drive, DOS, Arcade Machine, SEGA Game Gear (GG)
A great part of Mortal Kombat on Super Nintendo. For many, it is the best at 16 Bit. Graphics and sound look, as in the original version on arcade machines. Some additional innovations have been added. Cruelty and blood are also preserved, which, of course, is very important for Mortal Kombat. We can say that the developers excellently rehabilitated before the fans on this system, where the first part was subjected to censorship. So, certainly, the opinion that this part can be considered the best implementation of Mortal Kombat on 16 Bit is in many respects correct. Recommended for all fans of bona fide fighting games. Creators here have tried to glory. First, this game, as already noted, did not begin to be censored. Music and sounds are taken from the arcade version, but the voices on Snes are different and sound even better. This port also has a secret intro with Shao Kan and Kintaro. There was also an application for the famous Mode 7. During the fall from the bridge in one of the locations, the background grows and rotates slightly counterclockwise. In the arcade version, the background only increases. In the US came two different versions of the game. In the second version, many bugs were fixed and it became possible to fight with Nub Saibot after 50 wins. Also in version 1.1 there were demonstrations of the game and Johnny Cage's strokes began periodically to leave red traces instead of usual green ones. In this port the developers changed the colors of the costumes of Johnny Cage. In the arcade version of Cage the main color of the suit is blue and black, the color of the second is red and black. In the version for SNES colors - on the contrary. Ironically, the Japanese version of the game was subjected to some censorship: the blood of all the fighters was made green, and during the fatalities the screen became black and white. Despite this, the image remained colored during the background arrests, thanks to this it was possible to see the inscription "fatality", written not with red, but with green blood.
‹
›
Home
View web version