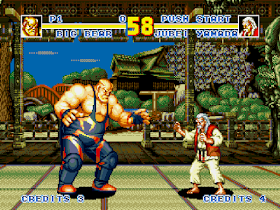 Genre: Action
Perspective: Side view
Visual: 2D scrolling
Gameplay: Fighting
Art: Anime / Manga
Published by: JVC Musical Industries
Developed by: SNK Corporation
Released: 1993
Platforms: SEGA CD / Mega-CD, Neo-Geo, Super Nintendo (SNES)
Very famous fighting game. A bit of the story: after the last tournament "King of fighters" it turns out that Geese Howard is not killed. A new tournament is quickly created - Fatal Trio. In general, successful mahacha to you, little ones!
As the name implies, Fatal Fury Special is an improved version of the fighting game Fatal Fury 2, and was ported from the arcade original.

A new battle mode Count Down (soak as much as possible in 3 minutes).
Additional color schemes for each player.
New and improved background.
Dolby Surround Sound.
In the appendage, Fatal Fury Special flaunts a pseudo-3D movement between the two plans.
We conclude - the game is worth it to play it, especially if you are a fan of fighting games!
‹
›
Home
View web version