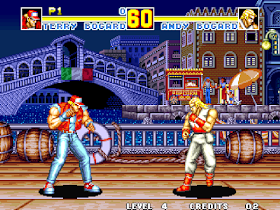 Genre: Action
Perspective: Side view
Gameplay: Fighting
Visual: 2D scrolling
Art: Anime / Manga
Published by: SNK of America
Developed by: SNK Corporation
Released: 1993
Platforms: Neo-Geo, SEGA CD / Mega-CD, Super Nintendo (SNES)
Fatal Fury Special is a clone of Fatal Fury 2 with a few but important improvements:
The game is very long because to finish it you need to defeat all fifteen selectable characters, including the clone of your character. If you win all the challenges without ever losing a round (you can lose a match and then continue with a new credit) you will enter a further meeting, a Dream Match where the player will face Ryo Sakazaki Art of Fighting: is the first reference at the intersection of the plots of the two videogames, where the events narrated in Art of Fighting precede those of Fatal Fury. If you end the game without ever continuing with new credits you will see a special ending that involves all the characters in the game.