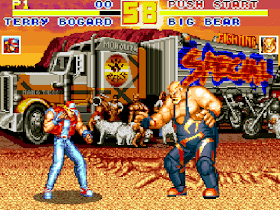 Genre: Action
Perspective: Side view
Visual: 2D scrolling
Art: Anime / Manga
Gameplay: Fighting
Published by: TAKARA Co.
Developed by: SNK Corporation
Released: 1995
Platforms: Super Nintendo (SNES), SEGA CD / Mega-CD, Neo-Geo
Probably the best 16 Bit port of Fatal Fury. What does this version not on the Sega Genesis. The graphics are pleasing to the eye. The choice of characters is amazing. 15 heroes are represented. Each of them has a good set of punches. It can be seen that the developers have tried their best. As in the previous parts, the fighters can approach the screen or move away from it. The quality of the game is above average. If you missed the first parts, then this one, if you please, do not miss it.
‹
›
Home
View web version