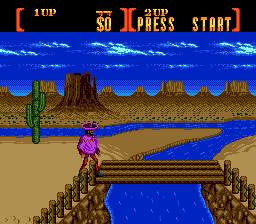 Genre: Action
Perspective: Side view
Visual: 2D scrolling
Gameplay: Shooter
Setting: Western
Published by: Konami
Developed by: Konami Co.
Released: 1993
Platforms: SEGA Genesis / Mega Drive, Arcade Machine
The game takes us to the territory of the Wild West, into an amazing and unpredictable world of westerns. Relations in those days were found out according to this scheme: if you want to survive, shoot first. It's enough to recall films with Clint Eastwood to reveal the principle: shoot, and only then think. If you believe Westerns, the faithful Colt was a continuation of the hand, no less. Do you overcome the desire to become one of the heroes of the western? A dream can come true thanks to one of the best fighters on the Sega Genesis - Sunset Riders.
We will get to know more closely with the characters - Billy Cool and Cormano Wild - through the summary presented in the game. Billy uses the Colt, Cormano likes the shotgun. Also we learn about the preferences in food and about the beloved word of cowboys. Playing for Billy is quite difficult due to the fact that his weapon has a small firing zone. To somewhat ease the situation, you should pick up two bonuses: the first allows you to shoot from two guns simultaneously, the second increases the intensity of the fire. Playing for Cormano, you will not feel such inconvenience, because the released grapeshot from the shotgun flies in different directions, touching all on its way. And by picking up bonuses, you become simply impregnable. By the way about the levels of complexity. They, as in most action games, only three: light, medium and heavy. They affect the speed of the bullets and arrows of opponents. At the difficulty level easy bullets fly slowly, and you have the opportunity to avoid getting hit, but on the hard you should quickly press the buttons so as not to catch your head a piece of molten lead.
During the passage of the game you will meet a variety of enemies, and not necessarily that with each level they will become stronger and stronger. I distinguish four types of enemies: Mexicans, cowboys, Indians, and also dogs. Cowboys are found at almost all levels, excluding Indian territories; armed with a colt, they should be killed on the principle of "shoot first." Mexicans do not have firearms, but carry knives, and some very dangerous explosives, so it's advisable to "cautiously" pass these guys. Indians meet on one of the seven levels, but getting to know them will not seem short-lived to you. They are of two types: with bows and tomahawks. Archers can shoot conventional arrows and incendiary, which are identical in their action to explosives. Those who are armed with tomahawks, will not make you worry, just shoot them from afar. The last type of enemy is very weak - these are dogs that can inflict damage on you only with a strong desire, you should just gape (real cowboys do not yawn!). At each of the seven levels you face to face with the bosses, for which you get a lot of money. As you progress, the bosses naturally become stronger. In this game, the Wild West is inhabited only by bandits (and courtesans! - Ed.), So you will not be able to kill excess.
You can not call the graphics of Sunset Riders good, it will be more appropriate to use the word mediocre. Drawing objects is at a low level, immediately causing a few negative emotions, there is a rather scanty gamut of colors. It would be necessary to make the levels more vivid and saturated with all possible shades of the color palette and slightly improve the detail of the world. The situation is very well executed animation of all creatures inhabiting the Wild West in this action movie. Numerous jumps, roll-ups, deft moves to jump onto the balconies of houses and bars, corpses falling out of the windows, spectacular explosions, certainly add points to the game. In general, graphic design left indefinite impressions: on the one hand, decent animation, on the other - poor-quality drawing. But cheerful and unobtrusive music really pleased. It contributes to a full immersion in the atmosphere of the Wild West. A lot of tracks are an indisputable plus (by the way, you can listen to the songs by selecting Options from the menu). The sounds are qualitatively complementary to the musical accompaniment and in no way interfere.
Sunset Riders pass quickly, but this does not affect the pleasure you received from the game. All fans of westerns and militants are recommended to get acquainted.

To get 99 lives, go to Options and, using the string sound test, listen to the melody "0E". Return to the title screen and start the game. Select the character and press the A button, and, while the selected character looks up, quickly press the A + B + C buttons.
‹
›
Home
View web version