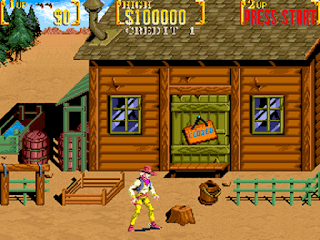 Genre: Action
Perspective: Side view
Visual: 2D scrolling
Gameplay: Platform, Shooter
Setting: Western
Published by: Konami Co.
Developed by: Konami Co.
Released: 1991
Platforms: Arcade Machine, SEGA Genesis / Mega Drive
The game tells about 4 bounty hunters looking for and eliminating dangerous criminals for a reward. During the plot, they kill criminals in a sequence of cost, from the lowest to the most expensive. At the beginning of each level, a poster with a photo of the wanted person, a reward for capturing and the words "Wanted: Dead or Alive!" Is shown.

The player can play as 4 bounty hunters (cowboys). Steve and Billy are armed with revolvers (fast weapons), Bob and Cormano - shotguns (scatter weapons).
Control is carried out using a joystick in 8 directions for moving and aiming and 2 buttons for shooting and jumping. The weapon has unlimited ammunition. The player can shoot up or forward when he is standing or walking; forward, up, or diagonally downward when jumping; and only forward when sitting. By holding the joystick up or down and pressing the jump, you can move up or down a level (where possible). At the upper levels, the player can shoot downward (vertically or diagonally).
There are 2 bonuses in the game in the form of sheriff's badges: a silver badge gives the player a second weapon - now it is possible to shoot simultaneously in 2 directions; the gold badge gives the player the opportunity to constantly shoot by simply holding down the fire button (without a bonus, the player can shoot in burst only by constantly pressing the button). These bonuses can be used together. The other 2 bonuses - a handful of gold dust and fried chicken - give the player extra points. These bonuses can either just lie in a certain place, or drop from a killed criminal with a bag, or can be obtained after visiting some buildings (the player must click up to enter). Some opponents use dynamite against the player, which can be picked up and thrown. The player's character dies immediately, having received any damage from the enemy (bullet, blow or explosion).
The game consists of 8 levels. To complete the level, you need to defeat the boss, which is at the end of each level. If a player plays alone, then he will receive the full reward for capturing the criminal, if there are several players, then everyone receives such a percentage of the reward, what percentage of the damage they inflicted on the boss. There are rounds in which the player rides a horse, as well as bonus rounds with a first-person view, where you have to kill enemies that appear in 8 directions.

The fight with Richard is divided into 3 stages. Initially, Richard hides behind two statues, but after the statues are destroyed, he fights headhunters one-on-one. He is also helped by henchmen. Richard is defeated, but stands up, laughs and throws out the iron plate that he wore under his jacket in self-defense. The fight resumes and Richard fights without any help.

After Richard is killed, the main characters receive a $ 100,000 reward and ride their horses into the sunset.

There are 3 types of bonuses in the game. These bonuses are lost after the death of the player, but remain during the transition from round to round (no deaths).
‹
›
Home
View web version