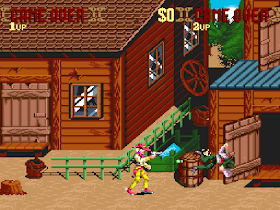 Genre: Action
Perspective: Side view
Visual: 2D scrolling
Gameplay: Platform, Shooter
Setting: Western
Published by: Konami
Developed by: Konami Co.
Released: 1993
Platforms: Super Nintendo (SNES), Arcade Machine, SEGA Genesis / Mega Drive
If there were cowboys in our time, this game could be a guide for them. We all watched movies about cowboys, how they caught criminals, receiving a lot of gold for their capture or destruction. And, as you probably guessed, the game takes place in the Wild West. Sunset Riders is a game about four cowboys who want fame and money. Of course, we won’t be able to play all four cowboys at once, but they will let us play for one of them.
What is worth watching in this game is the cutscene at the beginning of the game. There we are introduced to the main characters of the game. Especially the first part where they show Steve. There are two cowboys in a duel, then a shot is fired, the enemy falls, and Steve shows his face with a satisfied smile. Another last part of the intro, where Cormano sits and also smiles quite. This is perhaps one of the few funny parts in this game.

There is no plot as such in the game, at the beginning of each level we are shown the faces of the villains whom we need to punish for their deeds. And, of course, after we destroy them, money from the city or non-city treasury drips into our account. We can say that the whole plot is built on cleaning the entire neighborhood from insidious bandits. For each bandit give a certain amount of gold. And the more complex and important each criminal is, the more money they give for him.

At the beginning of the game, we are free to choose one of four heroes: Steve, Billy, Bob and Cormano. They differ only in appearance and two of them have a pistol, while the other two have either a rifle or a shotgun. And the weapon itself is different in that the pistol has a high rate of fire, and the rifle shoots three rounds in one shot. After choosing a hero, we are already going to punish bad people. And then the fun begins, in the best style of "Contra" (and in general, the game is very much like the legendary Contra), we rush through the levels, shoot back, jump, and from such an action, you forget about everything around. You are completely immersed in the game and do not leave it until you go through the whole. Levels are carried by so that you do not have time to blink an eye.
And, of course, what are cowboys without a horse. There will be levels where you will have to ride your trusty horse friend. You will have to ride behind the train with robbers, and at the same time shoot annoying bandits who are also on the alert. And of course, after each level you have to meet with the boss himself. And the bosses, I would say, are not very friendly and easy as it seems at first glance. And they are always helped by their servants, who are also not averse to getting rid of our presence. Well, the enemies are quite diverse. Someone just shoots with a pistol, someone persistently tries to come closer and stab us with his huge knife, and someone even throws dynamite to the left and to the right.
There is also a second funny moment in the game - we run into a bar, fill up the next bosses there, quite difficult ones, and then there is light, several women enter the stage and start dancing. Cheerful music plays, and the main character sits, relaxed, and admires this spectacle.
And so I came to the next boss, which turned out to be extremely lighter than the others. I dealt with him and thought that there would be a continuation, that this was not the last level, but the screen darkened, and the inscription “Congratulation” appeared. What was my disappointment when I was expecting a sequel, and here is the end for you. But I was not upset, because anyway, I enjoyed this game immensely.

I was very pleased with the graphics in this game, it was at the highest level. The backs are very colorful, well drawn and look like real ones. Models of heroes and enemies were also on top, smooth movements and drawing just look great. The building models are good too. One note about the special effects is very small, and the explosion special effect looks unnecessarily cubic. And yes, they look good.

I somehow didn’t really notice the music in this game, because I was completely carried away by the gameplay. But I think this is even a plus, because the music is not distracting. Well, the soundtrack is pretty mediocre. The sounds here are pretty good and also not annoying. Some of them are not very colorful. But these are just my quibbles.
In general, I advise everyone to spend a couple of hours of free time on this game.
‹
›
Home
View web version