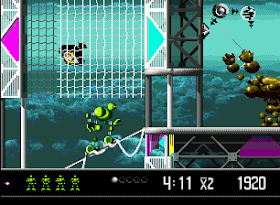 Genre: Action
Perspective: Side view
Gameplay: Shooter
Setting: Sci-Fi / Futuristic
Published by: SEGA of America
Developed by: BlueSky Software
Released: 1995
Platform: SEGA Genesis / Mega Drive
Funny game with an unusual character Vectorman. This is a robot garbage collector. In order to understand the whole charm of the game I will tell the story. By 2049, mankind had clogged the planet with garbage and toxic waste so much that they had to leave it. And go to other planets. Leaving the robots instead, so that they cleaned the planet for their return. There is no one like the story of the cartoon Wall-E. Behind the main, was left the robot Raster (Raster), which followed everything through the global computer network. But as a result of the failure, was attached to a nuclear bomb. As a result, he went insane, turning into the evil dictator Warhead. He declares himself the ruler of the earth, stops garbage collection, enslaves all robots and promises to destroy all people if they return. These times after burning garbage in the sun returns the usual robot cleaner Vectorman. Seeing all this, he decides to put an end to it alone.
In the course of the game you have to play a robot, which can shoot and do double jumps. You can improve weapons by collecting various bonuses. You also have to play in various different levels performed in pseudo-isometric 3D.

Before the start of the game you can have a little fun with the logo "SEGA". You can control the Vectorman when he lands on the logo. At the very top there is a monitor, destroying which, the hero
Will become the owner of a powerful weapon with which you can smash the logo into chips.
Shoot 24 times in the logo "Sega", then hit 12 times with your head in letters. The rain will start from the letters, and if you can catch at least 90 pieces, then start the game from the fifth day, and if you catch 110 or more - start with the tenth.
In order for the Vectorman to become a super vector, click on the pause and type: C + A + left + left + A + C + A + B.
For acquaintance with the coordinates, enter in the pause mode: B + A + left + left.
During the game, press pause and type A + B + A + C + A + B + B. Around the Vector, an aura of luminous elements appears.
To enter the secret menu, go to Options and type: A + B + B + A + down + A + B + B + A.
If you want to slow the pace of the game, type in a pause: down + right + A + C + up + left + A. In order to return everything back, re-enter this combination.
To make additional settings, enter the options menu, highlight the top line and type: A + B + B + A. Now light the second line and repeat the introduction of the combination. You will find yourself in the menu, in which you can set the number of lives from 1 to 99, the level of energy scales, choose the level of the game and the starting weapon.
In order to restore the energy of the Vector, click on the pause and enter: A + B + right + A + C + A + down + A + B + right + A.
Click on the pause and enter: A + B + A + C + A + B, and you will see how the parking lights will light. This focus works on all levels except 11 and 16.
‹
›
Home
View web version