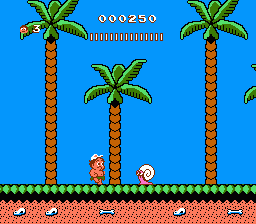 Genre: Action
Perspective: Side view
Visual: 2D scrolling
Gameplay: Arcade, Platform
Published by: Hudson Soft USA
Developed by: Now Production Co.
Released: 1991
Platforms: Nintendo (NES), Game Boy (GB)
Traveling hero-glutton, with the goal of saving his girlfriend. Part 2: the game has become much more diverse, the number of weapons and the main bonus have increased: dinosaurs appeared on which our hero can travel, each lizard can make its own chip, who spits, who beats the thorns. Also found dinosaurs and weapons can be left on the "base" after each level, and at the right time to resort to their help. The process itself has not changed one iota, we run, we destroy the bad guys and eat a lot!

Fruit - Fruits are perhaps the most numerous items in this game. When you eat some fruit, you get extra energy and glasses.
Milk - Completely restores energy + 2000 points.
Meat - Completely restores energy + 2000 points.
Skateboard - Increases movement speed.
Fairy. Temporarily makes you invincible.
Plant Egg - Reduces the level of your energy, and therefore very easy to die.

Remember that when you ride a dinosaur, your energy level drops much faster than when you move on foot. Sometimes, for example, moving on a pterodactyl is completely useless, and blue and brown dinosaurs are much more effective, although they move along the ground.
‹
›
Home
View web version