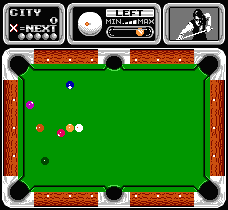 Genre: Simulation, Sports
Perspective: Top-down
Sport: Pool / Snooker
Published by: Data East USA
Developed by: Data East Corporation
Released: 1987
Platforms: Nintendo (NES), SEGA Genesis / Mega Drive, Super Nintendo (SNES)
A game similar to billiards. It is considered the best billiard simulator on the NES console. We are offered several modes of passage. You can play alone, in this mode you need to score all the balls in the pockets. But not everything is so simple: if you do not earn a certain number of points, passing the level does not count. To get more points, you need to score the numbered balls in order, or never miss. In multiplayer mode, you are waiting for the same thing, only in turn. You can also set up a game for two with 9 clogs hammered. Points can be earned by performing stunt strikes - that's where you can try out tricky tricks with hammering balls, like in real billiards. A valuable gift for all lovers of this fascinating board game.

In the game you have a limited number of strokes (of course, the blows in which the ball hit the pocket are not counted), so we advise you to practice before starting it. To do this, you need to select the Training mode and take care of the shots:
You can start each item with the button B. In the game, the beats are changed by pressing the A button and the arrows. After training, you can successfully fight for the cup.
The balls differ in color and the number of points on them. To find out how much the ball costs, you can press A.
At the end of each match, a table appears, in which the balls scored are scored. Each single ball is estimated at 100 points. A pair of balls, for example 1 and 2 or orange and blue, is estimated at 500 points. 3 balls - 1000 points, 4 balls - 1500, 5 balls - 2000, 6 balls - 5000 points.
In order to go to the second level, you need to score 3100 points. In the third - 3700 and necessarily to hammer in a ball in a pocket, marked by a star. In this case, you add a number of strokes.
The impact strength in the game is controlled by a single press of the button B. The pointer of the impact force is moved to the MAX position (maximum force stroke). If the impact force shown on the pointer suits you, then you press the B button. The direction of impact is regulated by the arrows.
You can play the game together. The rules are the same.
‹
›
Home
View web version