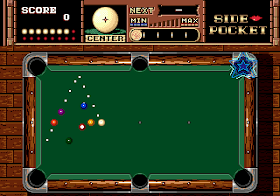 Genre: Simulation, Sports
Perspective: Top-down
Sport: Pool / Snooker
Published by: Data East USA
Developed by: Data East Corporation
Released: 1992
Platforms: SEGA Genesis / Mega Drive, Nintendo (NES)
We all once played billiards. Someone is bad, but someone easily drove six balls in a row. And then they said this: "Yes, you need to play in Side Pocket'e." I do not think everyone knows what SIDE POCKET is talking about. For the uninitiated, I will say: SIDE POCKET is a famous American billiard club located in the city of Atlantic City. Real professionals are playing in this club, to which we are still very far. And they are up to us, gamers - professionals of virtual reality. And so, in order to equalize our chances of winning on each battlefield (on computer and green cloth), the computer games manufacturer DATA EAST released in 1993 a game called "Side Pocket". In it, you become a participant in the billiards championship, and therefore must comply with its rules.

The most important rule of billiards is the observance of the law, which says: "The angle of incidence is equal to the angle of reflection." And so, adhering to this rule, you must drive the bone balls into the pockets. And chasing bone balls you will be a wooden KIEM, which the professionals still called Balabushka (abridged cue). The cue is a wooden stick, but not simple, but at the base it is enlarged, at the end it is narrower. It is the narrowed end and blows on spheres are put. But just to cut the ball so that it flew into the pocket, you can not. (That is, it is possible, but it is counted as scored, such a ball will not be). You need to drive the ball with another ball. That is, you, after aiming, hit with a cue on one ball, that beats the other, and that one rolls (or not) into the pocket. In addition to the usual billiards in the game there is a "Nine Ball". Nine balls. This kind of billiards has its own special rules. Did you notice that the balloons are written with figures? So, to drive balls into the pockets should be by numbers. The one who finishes the ninth ball wins. Or if the ninth ball is scored with the first blow.

And (once) - gain the power of impact.
A (twice) - a blow.
In - change the balls (or by color, or by numbers).
In (clamp and move in different directions) - change the direction of impact.
C - cancel the impact.
START - change the cursor type.

A few some tips

If you have difficulties with spare balls, then try to spend as few balls as possible in a game of six balls and score a bonus match between matches. For him you will be given three spare balls. Also, spare balls can be earned when moving from stage to stage. And if you score CHALLENGE SHOT'a you will fall as much as seven spare balls. If you play "Side Pocket" for the first time, first compete with a friend or friend. If you do not have those at the moment, play, at worst with your dad or grandfather. Well, and if they do not have time to play with you, spit and set the TRICK GAME mode (tricks). And to find out what tricks with billiard balls you can perform, look at the pictures from the game.

The game consists of five stages. At each you need to score a certain number of points. On the first 3000, on the second 4000, on the third 5000, on the fourth 6000, well, and on the fifth, as you guessed it, 7000.
If you are a professional, you can not read further. Just score all the balls in a row, and all your points. Semiprofessionals and amateurs will be informed that you get 500 points for 3 consecutive (or numbered) balls, for 3 - 1000, for 4 - 2000, for 5 - 2500, for 6 - 5000.
But there is a thing that will be interesting and pro. This is a prize strike. The possibility of its application repeatedly appears during the first three stages of the game. If any poke starts to wink at you with a glowing star, try to drive the ball into it. With luck, grab a prize. They may be a certain number of points, or three spare balls, or ... nothing. Another (but not the last) version of the bonus strike appears when you have only one ball on the green felt. As you see the inscription in one of the middle pockets, hit it. You will get - it will be, as in the case of a star, but without deception.
But there is also an option in the game that never dreamed of a boasted pro from SIDE ROSKET club. Cram into this pocket and your bit (zero) sphere. This is a violation of the rules, for which you will be fined, but you will fall into a tricky zone, in which the frictional force of the field is half the usual. Now you have twice the chance to score a ball in the pocket. And, in this zone, all the prize pockets!
And the last nice thing that appears after the second blow on the ninth ball when playing 9 and 10 balls (in the first three stages). This is a SUPER BALL. If you hit it, the inertia of your impact zero ball will increase by three, no, not even four times!
‹
›
Home
View web version