The Flintstones: The Rescue of Dino & Hoppy (NES) 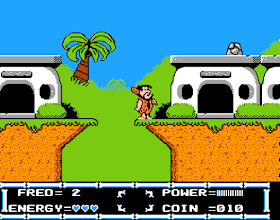 Everything was peaceful and calm in Bedrock, Fred Flintstone led a happy life with his wife Wilma, friends Barney, Betty and the alien Kazu and home dinosaurs Dino and Hoppy. But once, out of nowhere, a villain Dr. Butler from the XXX century appeared in a time machine and kidnapped Dino and Hoppy for his intergalactic Zoo. Finally, he destroyed Kazu's time machine, scattering parts of it around the world so that Fred could not use it.
Now, the brave Fred Flintstone has to travel around the prehistoric world in search of Kazu’s time machine parts and then head off to the time of the villain Butler to get his pets back.

The game is a classic platformer with side scrolling, designed in the cartoon style of the animated series on which the game is based. The gameplay is similar to games like the Chip ’n Dale Rescue Rangers, Darkwing Duck or Adventure Island. The main character - Fred Flintstone - runs through colorful game locations, fights enemies and collects various bonuses.

Total game consists of eight levels of stages. Each level is pumped by meeting with the boss - especially a strong opponent. Between the stages, Fred moves around the map, on which, besides gaming locations, there are also three additional “sports” levels with the game of basketball. The player stands alone with the computer. Exactly one minute is allotted to the game - the one who inflicts more strikes on the wrong gate will win. Only the last match is obligatory. For each level passed, Fred receives a part of the Gaza spacecraft, through which the characters will be able to go to the future and save their pets. To complete the game, you need to get all the details, that is, to complete all the levels. If a player missed one of the levels at the beginning, he may return, but at the same time he will have to pass the “Ocean” level again. Also, Fred should meet Barney, Betty and Wilma - after passing the level at which they were hidden, the characters will appear on the map. This is important, since all four heroes will go to the future with Gaza. Interestingly, the order of the characters in the chain during the map depends on the order of passing the levels where the characters are located.

At each level there are various bonuses. Also it is necessary to search and break the barrels - they are always hidden additions.
To confront numerous enemies, Fred uses his stone baton, with which you can apply the usual blows and super-blows. In addition to it, as the game progresses, another weapon appears: a slingshot, throwing hammers and exploding dinosaur eggs. Fred can also pull his head into the shoulders if the ceiling is too low or spikes protrude from it.
‹
›
Home
View web version