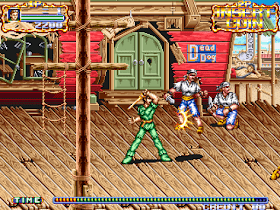 Genre: Action
Perspective: Side view
Visual: 2D scrolling
Gameplay: Arcade, Beat 'em up / brawler
Setting: Fantasy
Published by: Irem Corp.
Developed by: Irem Corp.
Released: 1992
Platforms: Arcade Machine, SEGA Genesis / Mega Drive, SEGA CD / Mega-CD, Nintendo (NES), Super Nintendo (SNES)
A game based on the movie, a beat 'em up about the confrontation between Peter Pan and his sworn enemy Captain Hook. You can choose either Peter himself or one of the four "Lost" as a playable character. In the arcade version, up to four heroes can be on the screen at the same time.
‹
›
Home
View web version