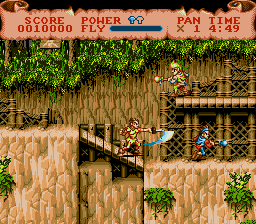 Genre: Action
Perspective: Side view
Gameplay: Fighting, Platform
Visual: 2D scrolling
Published by: Sony Imagesoft
Developed by: Ukiyotei Company
Released: 1993
Platforms: SEGA CD / Mega-CD, Nintendo (NES)
The game Hook is based on the film "Captain Hook" of the same name, which is not the author's continuation of the novel "Peter Pan". The plot says that Peter Pan went to London, got children and completely forgot that he once lived in Neverland. But after a while his children were kidnapped by Captain Hook. Not without the help of old friends and fairies Din-Din, Peter manages to get into the world of Neverland. There he meets Lost Boys. And somewhere from this moment the game begins.
Peter again gets his face. You have to go through a lot of fun adventures for 11 levels. Visit the forests, mountains, grab a pirate ship, and even find treasures. And all this in order to release the kidnapped children.
The game also appeared on many other consoles Game Gear, Genesis, SNES.
Version of the game Hook for Sega MegaDrive / Genesis. The game for Sega Game Gear beyond the Prototype is not gone.
Extra Lives: When you begin Level 5, fall down the first chasm to the right. At the bottom of the pit, walk to the right, sink and go underneath the rocks to get a leaf and a 3-UP. Die and repeat to get up to 99 Lives.
‹
›
Home
View web version