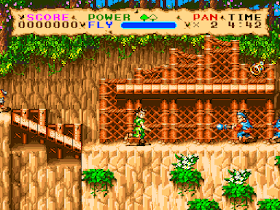 Genre: Action
Perspective: Side view
Visual: 2D scrolling
Gameplay: Fighting, Platform
Published by: Sony Imagesoft
Developed by: Ukiyotei Company
Released: 1992
Platforms: Super Nintendo (SNES), SEGA Genesis / Mega Drive, SEGA CD / Mega-CD, Nintendo (NES), Arcade Machine
A game based on the movie "Hook", which starred such a wonderful comedian as Robin Williams. The plot tells us the story of Peter Pan, who became an adult and ceased to be that perky youth who knew how to fly and fight deftly. Having left his fabulous island, he forgot all his former life - his former home and true friends, all his adventures and fights with his worst enemy. Now he is forty years old, he has a different name, family and a serious job. There was no trace of the wonderful child who once gave Captain Hook a beating. But the old enemies did not forget the boy. The captain, with a sharp steel hook for a hand, again challenges his opponent by kidnapping his children. Peter follows him to a magical land, but in order to win where mermaids, fairies and one-armed pirates live, he will have to learn to fly again. Throughout the 11 levels of the game you will go through dense forests, rocky mountains, capture a pirate ship and experience many more adventures. Treasure hunts will also bring a lot of pleasant moments. All in all, Hook is one of the few games that is as good as the movie they were based on. Single player game.
‹
›
Home
View web version