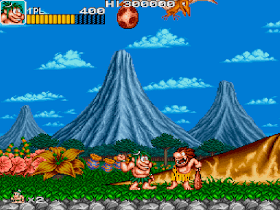 Genre: Action
Perspective: Side view
Visual: 2D scrolling
Gameplay: Platform
Published by: Data East Corporation
Developed by: Data East Corporation
Released: 1991
Platforms: Arcade Machine, Super Nintendo (SNES), SEGA Genesis / Mega Drive
Long ago, somewhere in Africa, two primitive tribes lived. One night, people from one of the tribes stole all the women from another tribe. Now the primitive people Joe and Mack need to get to the neighbors and return the stolen women to their tribe.

The main characters of the game are ancient people (possibly Cro-Magnons) Joe and Mac. They have to go through several levels, get to the leader of the enemy tribe and defeat him.
The levels in the game are locations with side-scrolling and 2D graphics (jungle, river, volcano, cave), where there are many enemies and obstacles. Some of the levels are divided into two parts, separated by forks. The player can choose which of the two paths to follow.
The enemies here are mostly people from the enemy tribe and small dinosaurs.
There are two types of useful items in the game. The weapon is in dinosaur eggs; items that replenish the health of the characters remain after the destruction of enemies. There are several types of weapons in the game: in addition to the usual stone hammers that the heroes are armed with, there are also stone wheels, boomerangs, pointed bones and torches.
There is a boss at the end of most levels. Among them are dinosaurs (for example, a tyrannosaurus rex or pteranodon), a giant carnivorous plant, a dinosaur skeleton, and a mammoth. The final boss is the leader of the enemy tribe.
‹
›
Home
View web version