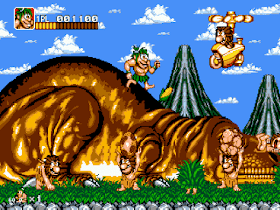 Genre: Action
Perspective: Side view
Visual: 2D scrolling
Gameplay: Platform
Published by: TAKARA Co.
Developed by: Data East Corporation
Released: 1994
Platforms: SEGA Genesis / Mega Drive, Super Nintendo (SNES), Arcade Machine
The villains steal all the women from the village, and two cave ninjas - Joe and Mac - go to save their girlfriends. A port of an arcade game, not the most advanced version of it, but why not play it? Your hero is initially armed with throwing axes, but other weapons can be found and used along the way. There are bosses, of course.
‹
›
Home
View web version