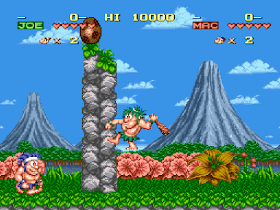 Genre: Action
Perspective: Side view
Visual: 2D scrolling
Gameplay: Platform
Published by: Data East USA
Developed by: Data East Corporation
Released: 1992
Platforms: Super Nintendo (SNES), SEGA Genesis / Mega Drive
Prehistoric game. The caveman jumps and swings his cudgel, making his way to the end of the game and beating along the way the dinosaurs and all the other prehistoric creatures that the developers have fantasized about. Playing with two is much more fun, but Joe & Mac is a lot of fun alone. The game has been released for several gaming platforms, but for many the Super Nintendo implementation remains the best. The level design is good. Audio and video are also up to the mark. Management sometimes causes criticism, one way or another, the game has the virtues of not immediately throwing the controller.
‹
›
Home
View web version