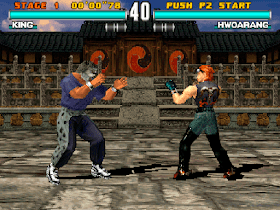 Genre: Action
Perspective: Side view
Visual: 2D scrolling
Art: Anime / Manga
Gameplay: Fighting
Narrative: Martial arts
Published by: Namco Limited
Developed by: Namco Limited
Released: 1997
Platforms: Arcade Machine, PlayStation (PSX, PS1)
Tekken 3 premiered in arcades in 1997. To say that the new part made a splash is to say nothing. By all accounts, Tekken 3 is considered to be the best game in the series. In addition, it is more often mentioned than others as the best fighting game "of all times and peoples."
The game differs sharply from the previous parts with incredible graphics for the PlayStation level and amazing dynamic gameplay. It has a lot of improvements, great animation, 15 new characters, two mini-games, an abundance of bonuses and a seriously redesigned gameplay. There was an opportunity to go to the side, combinations of throws, the speed of the game was increased and the height of jumps was reduced, a myriad of movements were added and much, much more.
‹
›
Home
View web version