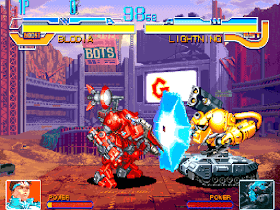 Genre: Action
Perspective: Side view
Gameplay: Arcade, Fighting
Vehicular: Mecha / giant robot
Setting: Sci-fi / futuristic
Published by: Capcom Co.
Developed by: Capcom Co.
Released: 1995
Platform: Arcade Machine
This is a fighting game where you control a huge, heavily armed robot. There are 6 pilots to choose from, in addition to which the type of robot is also selected, of which there are 12 pieces. You could already see all the robots in Armored Warriors, to whom it was to your taste, you should definitely play this one, it allows you to take a different look at the world of Armored Warriors. Graphically, the game has not gone far from the above mentioned, but this is more of a plus than a minus, since the atmosphere that reigned there throughout the game has been preserved. All tricks are conveniently located on 4 buttons, which you will not find in short supply, and seasoned with all sorts of special effects. In general, the game looks beautiful, the battles are dynamic and varied, in general, a worthy representative of robo-fighting.
‹
›
Home
View web version