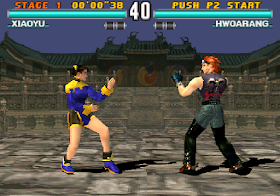 Genre: Action
Perspective: Side view
Visual: 2D scrolling
Gameplay: Fighting, Martial Arts
Art: Anime / Manga
Published by: Namco Hometek Inc.
Developed by: Namco Limited, Production I.G
Released: 1998
Platforms: PlayStation (PSX, PS1), Arcade Machine
Released on arcade machines in 1997, and subsequently for the Sony PlayStation game console in 1998 around the world, the game was well received. It is still considered one of the greatest fighting games in the history of games.

Tekken 3 uses a similar combat system and basic concept, like its predecessors, but brings many improvements, such as sharper graphics and animation, fifteen new characters, more modern music, fast and comfortable gameplay.
Perhaps the most notable change in Tekken 3 is the combat system of movements, which gives all the characters freedom of movement, allowing them to bypass the enemy by clicking on the arcade stick (or by pressing the analog stick in the console version) in the corresponding direction. Another big change in the movements of the characters was a decrease in the height of the jumps. The blows in the air became more manageable. In addition, the improved game engine allowed you to quickly make knockouts and combos.
Tekken 3 was the first game in the series, in which there was a mini-game called "Tekken Force", in which it is necessary to defeat all the soldiers of "Tekken Force" and the main boss Heihati Mishima at the end of the level. If the player has successfully passed the mini-game four times, then he will save Doctor Boskonovich who will be available as a playable character. This mini-game later appeared in Tekken 4 and Tekken 5 as a full-fledged arcade with various enhancements. However, in subsequent games after Tekken 3 Boskonovich was excluded as a playable character. There is also a mini-game "Tekken Ball", similar to beach volleyball, where you have to hit the ball with a powerful attack and hit the opponent or try to hit the ball in such a way that it falls to the ground in the opponent's area, thus causing damage.

Fifteen years after the tournament "King of the Iron Fist 2", Heihachi Mishima creates a military organization "Tekken Force", which should deal with the protection of Mishima Zaybatsu. The detachment is looking for an ancient temple located in Mexico. Soon after arriving there, Heihachi finds out that the detachment was destroyed by Ogrom. However, Heihati, as a witness of events, seeks to seize Ogre in the hope of directing his strength for his own benefit. Soon, various martial artists from all over the world find themselves dead. In all this, Ogre is suspected.
At that time Jun Kadzama lives a quiet life in Yakushima with his young son, Dzin, born after the events of the previous tournament. He is the son of Kazuya and the grandson of Heihati. However, their peaceful life comes to an end when Jun begins to feel the approach of Ogre. Jun instructs Jin to find Heihati, if something happens. Some time after the fifteenth birthday of Dzin, Ogre really attacks. Jin valiantly tries to fight with Ogre, but the enemy strikes him and the hero loses consciousness. When Jin wakes up, he discovers that his house was burned, and his mother is missing and most likely dead. Jin finds the part of the Devil that used to be in Kazuya, and he gets into it, leaving a mark on his left hand. Later, Jin goes to Heihati, as his mother asked, explaining his position. He asks to be trained to become strong enough to take revenge on the Ogre. Heikhathi agrees and begins to teach Jin to the traditional Karate style of Mishima, also sending him to his Mishima Polytechnic School.
Four years later, Jin becomes a master of Mishima style karate. On the nineteenth birthday of Dzin, Heihachi announces the third tournament of the "King of the Iron Fist", secretly intending to entice Ogra, thinking that a large number of strong fighters will draw his attention, while the protagonist is preparing for the upcoming fight.
At the end of the tournament, in a large temple, Paul Phoenix defeats Ogre and leaves the tournament, thinking that he won. But Ogre turns into its true form of monstrous beast, and Jin finally confronts him. The Jin fights and defeats Ogre, and the latter dies, breaking up into particles. But suddenly, Jinu shoots the squadron "Tekken Force" led by Heihati, who no longer needs a hero, and personally makes the last shot in the head of his grandson.
Nevertheless, the Jin survives, the Devil awakens inside him, and the hero flings the "Tekken Force" soldiers, and pierces Heihati into the temple wall. Heihati survives during a long fall, looks up and sees that Jin sprouts feathered wings and he flies away.
‹
›
Home
View web version