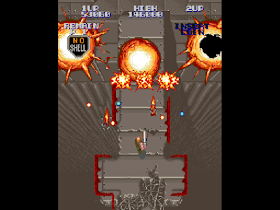 Genre: Action
Perspective: Side view, Top-down
Gameplay: Arcade, Platform, Shooter
Published by: Nintendo of America Inc.
Developed by: Konami Industry Co.
Released: 1990
Platforms: Arcade Machine, Nintendo (NES), Game Boy
A year has passed since the events in the 1st Contra. But humanity is in danger again. This time, the local military base and its army have been captured by alien forces. Bill and Lance are sent to fight not only their former associates, but also a new mutated form of the same alien creatures they fought during their previous mission. You will find a new portion of explosions, skirmishes, different types of weapons, various enemies, enemy vehicles and monsters. The game has become much more difficult.
‹
›
Home
View web version