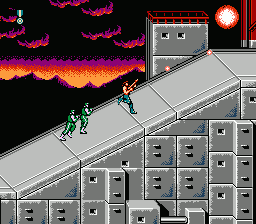 Genre: Action
Perspective: Side view, Top-down
Gameplay: Arcade
Published by: Konami
Developed by: Konami Industry Co.
Released: 1990
Platforms: Nintendo (NES), Game Boy, Arcade Machine
The second game of the series in a row, which appeared on the NES console in 1990, was a continuation of the game Contra, released two years earlier.
The idea and the atmosphere remained the same - the heroes of the struggle against evil in the form of an open and straight. The graphics on the level of the best games of the period.
The gameplay has not undergone significant improvements. On the one hand, it affects the overall design of the game. No events have become more global, but often what is happening on the screen is reminiscent of the best scenes of the fantastic action movies: the original location, the earthquake, a large number of enemies, a top view on a number of levels, which have become a hallmark of the game, and used in its proceedings.
The increased overall speed of the game. Significantly increased the number of obstacles, enemies, and the frequency of their occurrence. Enemies are very diverse (cannon, pulled out of the ground, snipers in the trees, rapid-heavy mortars, crumbling ceilings, the robot-spider). The attack is carried out under a variety of angles and trajectories.
Levels increased in size. Levels overlooking the back is no longer in their place appeared levels with the top view.

A set of weapons has not changed much, but the balance was added.
‹
›
Home
View web version