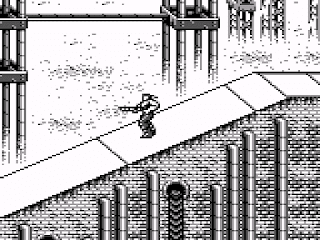 Genre: Action
Perspective: Bird's-eye view, Side view
Visual: 2D scrolling
Gameplay: Platform, Shooter
Published by: Ultra Software Corporation
Developed by: Konami Industry Co.
Released: 1991
Platforms: Game Boy, Nintendo (NES)
This is the third game in the Contra series, a sequel to the original Contra and Super Contra (Super C). Was designed specifically for a portable platform.
In terms of gameplay and engine, the game strongly resembles Super C. Some of the five levels use familiar themes. Odd numbered levels use the traditional side view of the series. As with Super C, there are 2 top-down levels. Most of the tunes are taken from arcade Contra, a few tunes are exclusive.

The composition of the weapon is almost unchanged from the Super C. The standard rifle has been replaced by a machine gun. A new weapon has been added to replace the carved laser rifle:
‹
›
Home
View web version