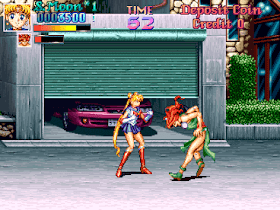 Genre: Action
Perspective: Side view
Visual: 2D scrolling
Art: Anime / Manga
Gameplay: Beat 'em up / brawler
Setting: Fantasy
Published by: Banpresto Co.
Developed by: Gazelle Co.
Released: 1995
Platforms: Arcade Machine, SEGA Genesis / Mega Drive, Super Nintendo (SNES)
So, the planet is in danger again and only warriors in sailor suits can save it! Each of the five heroines has its own, slightly different techniques, unique super-attack and voice acting. You can run and hit with a run. Many of the enemies are probably familiar to you from the anime series. Although the area of effect is sometimes lame, this is a fairly high-quality example of its genre from Banpresto, worthy of at least a single playthrough.
‹
›
Home
View web version