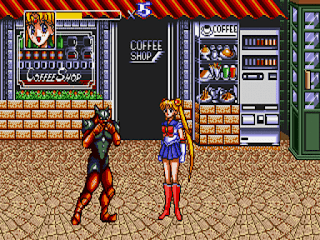 Genre: Action
Perspective: Side view
Visual: 2D scrolling
Gameplay: Arcade, Beat 'em up / brawler, Platform
Art: Anime / Manga
Setting: Fantasy, Sci-fi / futuristic
Published by: MA-BA Corp
Developed by: Angel
Released: 1994
Platforms: SEGA Genesis / Mega Drive, Super Nintendo (SNES)
A game based on the famous anime about warriors in sailors. Dedicated to lovers of Japanese culture. For its genre, there is a rich selection of characters - as many as five, and all are adorable and have their own style. For fans of difficulties at a higher level of difficulty, you can fight with an additional boss.

Usagi is just an ordinary schoolgirl, a narcissistic 14-year-old girl, she lived peacefully in this world and did nothing good until her black cat spoke to her ... It changed her whole life. Now she must (against her will) save the world from the forces of evil as Sailor Moon, the leader of the Sailor Scouts. This is the first, but not the only game based on the popular animated series. This game focuses on Sailor Moon's fight with Queen Beryl.
‹
›
Home
View web version