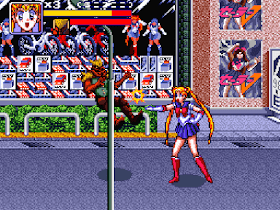 Genre: Action
Perspective: Side view
Visual: 2D scrolling
Gameplay: Arcade, Beat 'em up / brawler, Platform
Setting: Fantasy, Sci-fi / futuristic
Published by: Angel
Developed by: Angel
Released: 1993
Platforms: Super Nintendo (SNES), SEGA Genesis / Mega Drive, Arcade Machine
The game follows the first arc of the series from beginning to end. The player has a choice of all 5 heroines: Sailor Moon, Sailor Mercury, Sailor Mars, Sailor Jupiter and Sailor Venus. Each has its own unique special attack, which, in principle, adds variety. The game has 5 levels, divided into two stages, and at the end of the second stage, a boss is waiting for us. There will be two in the final.
At the end of the level, points are calculated and a score is given. An interesting fact is that only two levels are available on the easy difficulty level, and on the difficult one there will still be a battle with Queen Metalia in the final.
‹
›
Home
View web version