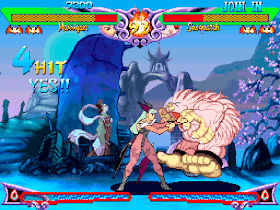 Genre: Action
Perspective: Side view
Visual: 2D scrolling
Gameplay: Fighting
Narrative: Horror
Published by: Capcom Co.
Developed by: Capcom Co.
Released: 1995
Platforms: Arcade Machine, SEGA Saturn
If we touch on the chronology of the release of games with this theme, then this will be the 4th. "Darkstalkers' Revenge" is the name of the next part of the fighting game, the characters of which are collected from the other world in order to realize their mission. Oddly enough, but the characters have not increased in number or content, there are still 14. There are more modes in the game, but in addition to normal and accelerated, there is also auto and auto / accelerated, which makes the choice much easier. The interesting thing is that here 2 rounds pass like 1, not nearly slowing down the gameplay and not knocking down the mood, you fight until the very end, this feature was taken from Vampire Savior. There were much more movements, which made it easier to use various combo techniques, and it just became more interesting to fight. The workmanship is high, all 2D models look sharp, and the colors are nicer.
‹
›
Home
View web version