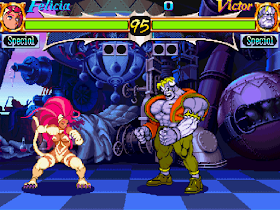 Genre: Action
Perspective: Side view
Visual: 2D scrolling
Gameplay: Fighting
Narrative: Horror
Published by: Capcom Entertainment
Developed by: Capcom Co.
Released: 1996
Platform: SEGA Saturn
Night Warriors: Darkstalkers' Revenge combat system consists of 6 buttons: Kick, Punch, Medium and Strong. It is possible to activate an air guard. Each character has a gauge of SUPER, filling up as the blows. It allows to perform the "ES Special" using part of the SUPER gauge and the "EX Special" using the entire SUPER gauge.
Some additions are worth noting, compared to Darkstalkers: The Night Warriors, as the ability to keep during a fight the gauge of SUPER, the addition of a mode automatically activating the guard and the possibility to chain combos.

Pyron decides to invade Earth to add to his planet collection. The most ferocious monsters on the planet, the Darkstalkers, are the last bastion of humanity against the invader ...
‹
›
Home
View web version