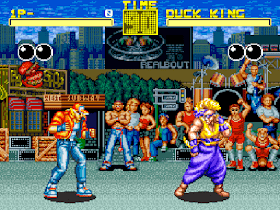 Genre: Action
Perspective: Side view
Visual: 2D scrolling
Gameplay: Fighting
Published by: TAKARA U.S.A. CORP.
Developed by: SNK Corporation
Released: 1993
Platforms: Super Nintendo (SNES), SEGA Genesis / Mega Drive, Neo-Geo
Like it or not, and no matter what plot you attach to this kind of games, the meaning is the same - to defeat all opponents. Choose from three characters. Each of them, of course, is strong, but the opponents also did not collect candy wrappers at their leisure. It will not be easy to defeat them, even taking into account the fact that in the game there are as many as 8 difficulty levels to choose from. Game for 1-2 players.
‹
›
Home
View web version